Here Are 11 Song Covers That Definitely Rival The Original Versions

Nothing like a good cover to make you rethink everything.

Sometimes in life a musician tries their hand at someone else's song and knocks it out of the park. Whether it's a simple acoustic version or a full rework of a classic, there are just some cover songs that could very well beat out the original.

This one is interesting because Dolly Parton is actually Miley Cyrus' godmother. We’re assuming Miley had about 20 years of practice singing this song so it makes sense that it would rival the original.

2. Nirvana// The Man Who Sold The World (Originally performed by David Bowie)

It's not very clear whether or not David Bowie hates or loves all the attention Nirvana received after their "The Man Who Sold The Word" cover. What is clear is that fans of both would be hard pressed to choose a winning version.

3. Amy Winehouse and Mark Ronson//Valerie (Originally performed by The Zutons)

You would be surprised at how many people truly don’t realise that Amy Winehouse’s “Valerie” is a cover of a Zutons song. This cover went on to become the break out single for Amy and arguably the song she is most remembered for. That, and “Rehab”, of course.

If you were born post 1985, chances are you're not going to remember Bonnie Rait's "I Can’t Make You Love Me". Thankfully, Bon Iver brought it all the way back around in 2011 with a cover that basically set the folk world on fire.

Both versions of this song are actually extremely popular and well liked. Leonard Cohen is, of course, a legend and Jeff Buckley could basically do no wrong. In 2006 The OC brought this classic back around and made it the soundtrack to Marissa Cooper's death (horrifying!) with a cover by Imogen Heap but the Jeff Buckley version endures.

This one is a bit contentious. Many people believe that Miley's version of "Summertime Sadness" was overdone and not necessarily in the spirit of Lana's original version. However, this cover is the perfect example of an artist performing the song true to his or her own singing style. Good job, Miley.

This is another one of those songs that people don't actually realise is a cover. In 2003, Swedish band The Knife released this on their Deep Cuts album. A year later Jose Gonzalez covered it and thus The Knife's version was left in the dust.

This one isn't strictly a cover so much as it is a heavily sampled reimagining of a great song. There's not much to say other than Drake and Rihanna did a great job on this.

Youtuber Jeni Suk put her own personal stamp on "Wildfire", a song that already has a pretty interesting journey. First it was a SBTRKT + Little Dragon song, then Drake remixed it and the Jeni covered the remix. Either way, Jeni's take on it is fresh.

Taylor stopped by the BBC Radio 1 live lounge when 1989 first came out. Vance Joy’s version is a winner but there is just something about it that suits Taylor’s voice. At one point during the track (around 2:00) you really have to question whether this is Taylor or Vance Joy’s song.

11. Ed Sheeran //Stay With Me (Originally by Sam Smith/Tom Petty)

The odd thing about this cover is that, even though everyone in the whole wide world knows that this is a Sam Smith song, Ed Sheeran’s voice seems to compliment it far more. Ed sings in a lower vocal register than Sam Smith, which alleviates the feeling of teetering on the edge (of sanity) that Sam Smith's original brings on. 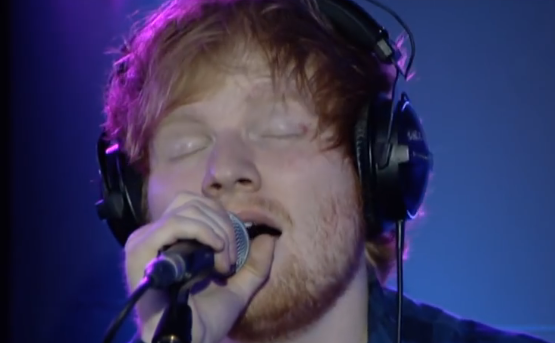