A college in Pasadena is offering a course on Beyoncé! But with a TWIST that's totally not flawless.

At first it seems like everybody's dream - a whole college course on Beyoncé  - that even comes with course credits.

But looking closely at the course description for "Beyoncé: Pretty Hurts" at the Art Center College Of Design in Pasadena, you might want to think again before submitting your application and packing your bags.

The brief below comes from the college website, and it's... um... well. 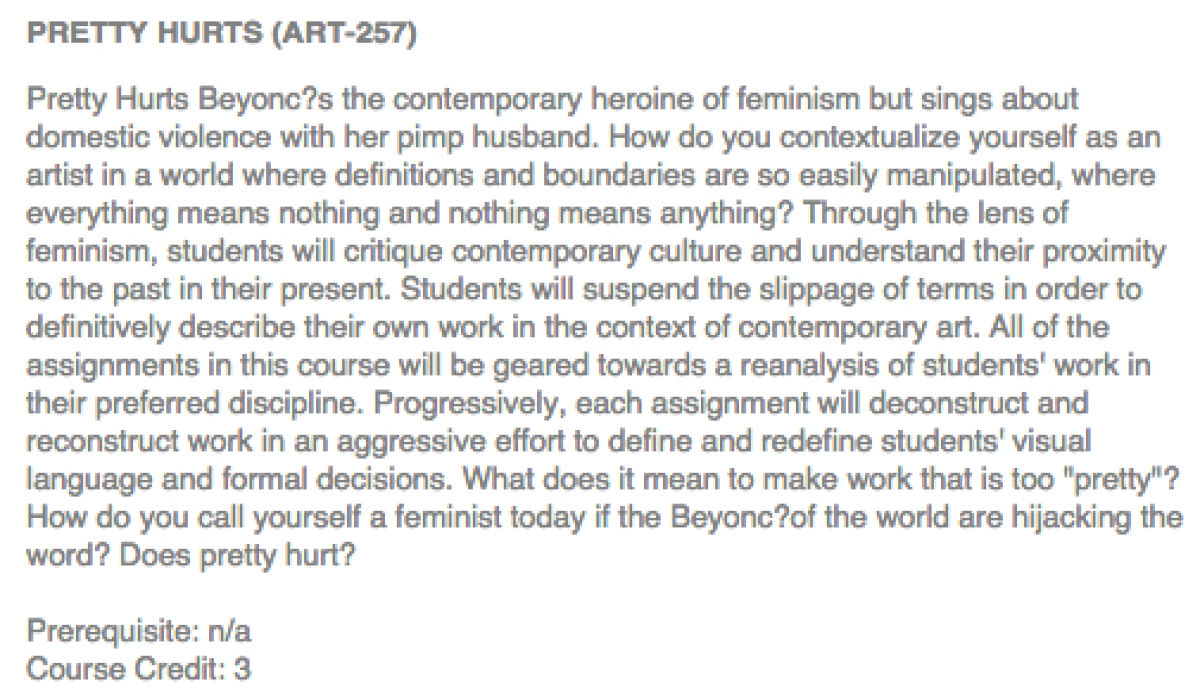 I mean, they kind of ruin anything else they have to say after calling Jay-Z a "pimp" (because god forbid a Grammy-winner with a net worth of over $1billion be considered as anything else because he does hip-hop, right?), but let's look at this in more detail.

The reference to "domestic abuse" is one line in one song (Jay raps "eat the cake, Anna Mae", a reference to Ike and Tina Turner's abusive relationship). While this is a valid criticism, it's hardly a basis for dismantling Beyonce's otherwise powerful representation of feminism as an "easy manipulation" of its definition.

Claiming that the 'Beyoncés of today are hijacking the word' is, at its core, elitist gatekeeping. By acting as though feminism is only allowed for a certain group of people who abide by a set of strict rules, people completely negate its actual, most basic meaning: and that is to give women everywhere - regardless of race, age, identity or social status - the freedom to make their own choices as women. Trying to undermine one woman's work as "too pretty" for feminism completely negates its message.

Beyoncé can be a booty-shaking diva AND a wife and mother. She can sing about sex with her husband AND be a very intelligent businesswoman. She can be feminine, AND feminist. And her advocation of the word should not be considered a "hijacking", rather than an inspiration for women all across the world that they can be exactly the same.

Bey, her flames, and her textbook definition of 'feminist' are looking down on you pretty hard.