Rock's favourite dad just had a hell of a birthday party.

Ever wanted Alice Cooper, Tenacious D or Slash to show up to your birthday? Then you're in luck, as apparently there's one easy requirement: Be Dave Grohl. 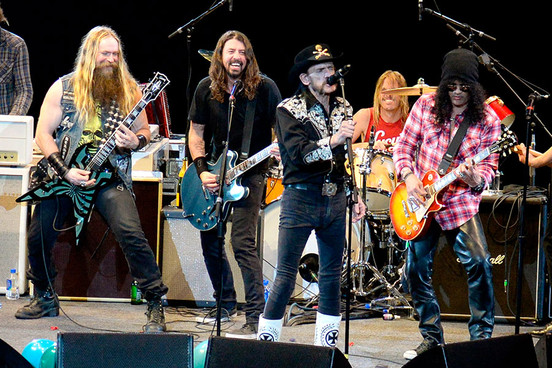 The Foo Fighters frontman turns 46 on Wednesday (congrats Dave, you don't look a day over 1997). To celebrate over the weekend, the band threw a benefit concert in Los Angeles. What fans at the gig weren't expecting, however, was that the Foos would be joined onstage by a host of their friends: which include some of the most legendary names in rock.

Yep, that's the band playing "School's Out For Summer" AND "I'm Eighteen" with recently-exhumed Alice Cooper himself.

Motorhead's Lemmy, Kiss' Paul Stanley and even Van Halen's David Lee Roth were just some more of the names to join Dave and the band onstage during the marathon 32-song set. There were songs from latest album Sonic Highways, classic favourites such as "Learn To Fly" and "Everlong", and plenty of mind-melting covers; including this sick version of Led Zeppelin's "Immigrant Song" featuring Slash, and of course Tenacious D's Jack Black wailing the vocals.

The gig, being the Foo Fighters' first performance of the year, was thrown to raise money for three separate charities; Sweet Relief, MusiCares and the Rock School Scholarship fund - all to which portions of ticket sales went to.

Check out one more video of both Van Halen's "Panama" and "I Ain't Talkin' Bout Love" with David Lee Roth himself.