9 times out of 10, when an artist puts out a new song, someone is going to claim they stole it from someone else. It's only a symptom of the fact that nothing is 100% original and everything is probably influenced by the same genres.

So, naturally, when Demi Lovato released "Cool For The Summer", the comparisons started rolling in.

Cool For The Summer by Demi Lovato kinda sounds like Domino by Jessie J, but it's a good song

Demi lovato cool for the summer reminds me of domino by Jessie j :/

Trust Demi to have the perfect response though. 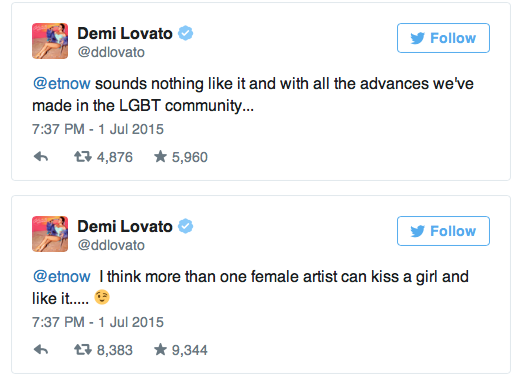 Demi is right. Katy Perry certainly isn't the only girl who has kissed a girl. Jessie J wrote for basically every female artist in pop at one point. It stands to reason that most new pop music sounds like a Jessie J track. Mystery solved.

Listen to Demi's "Cool For The Summer" below.