AJR Interview: Meet The Brothers Behind The Hit Single “Weak” 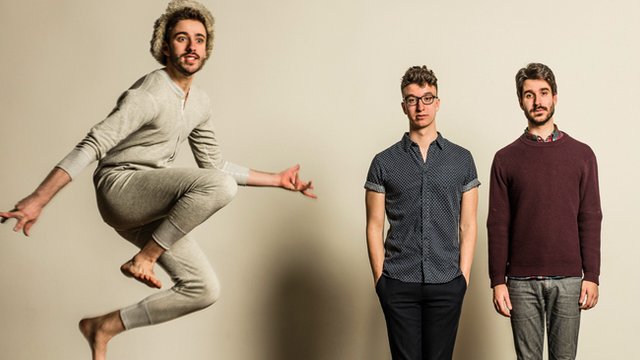 Meet the three brothers behind the viral smash "Weak".

You might not be familiar with AJR but you've probably heard their song 'Weak'. The three Ivy-education brothers, Adam, Jack, and Ryan Met, have been writing, recording and touring together for years but now they're on the precipice of a breakthrough into the mainstream charts with 'Weak', which has been streamed over 140 million times on Spotify.

We caught up with the DIY pop band over email to discuss having a song go viral, Hanson and pineapple on pizza. Y'know, all the important stuff.

PopBuzz: Let’s start by talking about ‘Weak’. It’s racked up over 130 million streams on Spotify. How the hell did that happen?

AJR: We never thought a song of ours would have such an immediate, visceral response. The organic growth that happened on Spotify really surprised us and that allowed the song to get into the culture even before it started on the radio. It is such a fantastic tool for new artists, especially since Spotify allows the songs to speak for themselves.

What was it like when you first heard your own song on the radio?

It was really exciting. We were on a plane and heard it through the TV. We had to stay silent since it was a red eye [a night flight], but it was still a very cool experience.

There is a Genius annotation on one of the lyrics to ‘Weak’ which helpfully clarifies that the song might be about avoiding bad things... “like sex”. Is that correct?

To each their own. Everyone has different things they are addicted to, whether it's drugs, alcohol, sex, foods, television, or pretty much anything. We feel the value in the song is that people can fill in their own vices and make the lyrics apply to their own lives.

What is your biggest vice that you’re willing to admit to in a public interview?

Netflix is a big one for us. Even when we are on the road staying in different hotels every night, it is something consistent and reliable.

Talking of lyrics, “Come Hang Out” seems to be about the sacrifices you made to be in a band. Is that something you think about often, whether it’s worth it or not?

It is something we think about, but not in a sense of whether or not it is worth it. It is definitely worth it. More in a sense of the road not traveled. What would it have been like to have a traditional high school/college experience without being on the road all the time?

There is a long lineage of bands formed of siblings (The Beach Boys, Bee-Gees, Jackson 5 etc.) so the formula definitely works. Were you guys ever in other bands? If so, what made you choose AJR over the other projects?

We were never in other bands. In our minds, there was never really another option to be in other bands. We grew up listening to the same music with the same vision for what we wanted and that's what we created. There is something about sibling bands that seems to work and we are honored to join that lineage.

Who would win in a fight between you and Hanson?

Definitely Hanson, we are really weak.

All three of you have attended Columbia college. Tell me about your time studying there? Did it have any influence on the band at all?

We all find inspiration in so many places. The academic world definitely inspired some of our music. Some themes are directly from classic literature that we read in school and some themes are from the overall college experience, such as Come Hang Out.

Are there any professors you’d like to drag on the internet? If so, now’s your chance…

No, no. It really was a great education.

Do your parents ever get involved? Even if it’s just the merch stand?

They played us the music that we listened to growing up: music from the 50s and 60s like the Beach Boys and Simon & Garfunkel. They have continuously been supportive of our work.

What can we expect from your guys this year?

We just announced our sophomore album, The Click, which will be coming out June 9th. We are very excited for people to hear this next step in the AJR journey.

Finally…where do you stand on the pineapple on pizza debate?

Thanks AJR! Listen to 'Weak' on PopBuzz Radio over here.