We Talked To LANY About Halsey, Troye Sivan And YouTube Comments 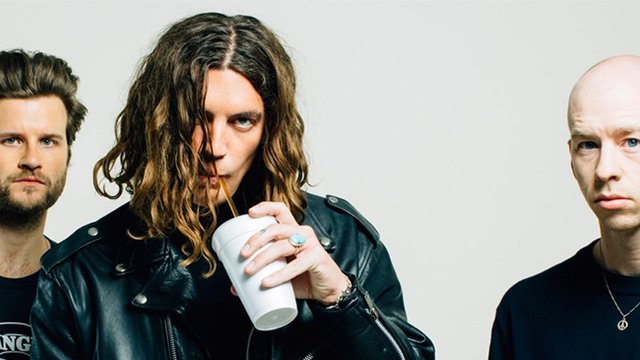 A couple months ago LANY came to the UK to treat fans to new tracks from their long-awaited debut album, LANY. We went along and in our professional opinion it was 'very good'.

The next day we met up with Paul, Les and Jake in an exceptionally noisy cafe to discuss their debut as well as pondering other important questions like 'what keeps you up at night?' and 'what's the worst comment you've seen on one of your own music videos?'. Unfortunately, we got distracted by memes or something and forgot to post it until now. Sorry about it.

PopBuzz: Your album is coming out super soon, which must be exciting! We’ve heard a few singles so far and I was wondering how you guys decide which singles to put out? Do you even get to decide that?

Paul Klein: Oh we decide everything. We’ve got this really cool relationship with the label that allows us to decide pretty much everything. There’s reasons for all it. I could walk you through it, I guess?

Are you a bit sick of ILYSB?

PK: I’m not! I guess you would think I would be.

I’m not either but how come ILYSB is the only older song on the record? You left off ‘Where The Hell Are My Friends’, for example.

PK: Well, ILYSB has always been just glaring at us with this huge commercial potential. We’ve never got radio – and we never thought we would be a radio band! We put that song out two-and-a-half years ago and nobody thought that song would ever be on the radio. It was obvious that people loved it and everyone was obsessed with it, and when we signed with a record label they said we should take it to radio at the right time, so that’s why the song is on the album. We really wanted to give the song a chance for radio.

There are so many artists who have made it outside the usual route of radio, including your friend Halsey. Is that something you’ve been working towards?

PK: Yes, obviously. We were on tour with Halsey and Troye Sivan and both of those tours were great indicators of where we could go as a band.

What keeps you up at night?

PK: Everything moves really quickly with us and there’s always so much to do. We like to do a lot of it ourselves; we design our merch, we do our album art, we write the songs, we mix the songs. There was a time when we were mastering our songs too. We are control freaks but not in a bad way but in a really good way - this is our thing! This is our band, our brand, it’s us. So, with that comes a lot of responsibility. You’ll be in bed and you’ll be like, ‘Shit! I have to turn in that hoodie design right now or if we miss it we’ll miss the deadline for these shows!’ so stuff like that keeps me up.

So, you’re a control freak?

Jake Goss: Yeah. Why wouldn’t you want to be?

PK: Our successes and our failures fall on our three shoulders.

Les Priest: Jeez. I was going to go with poverty…

PK: Oh I try not to read them. I know people can be ruthless on YouTube.

What’s the best way to ask someone out on a date?

JG: When I asked my wife out, I was in a parking lot by a Gold’s gym on Cole Ave in Los Angeles and I paced around for an hour before I called her.

JG: It worked. And now she’s my wife.

PK: I once ran out of a restaurant to ask a girl out. I was working at the restaurant and she was sitting there the whole time and I remember thinking she was so pretty and I just want to ask her out so bad. I watched her walk past me out of the restaurant and I sat there and thought about it for 20 seconds and ran right out the door! [laughs] She said yes!

PK: We met up once and went to a shop and that was that. That’s all that ever happened.

What’s the biggest misconceptions about LANY?

PK: Yeah, there are some misconceptions. That it’s only for young people. I’m not sure people understand…I think if people were to criticise us it would be to mock the innocence and purity of it, by not thinking we’re intelligent or intellectual. I just think they would knock the simplicity and purity of it when those are our strong suits.

Do you read your own reviews? What’s that like?

PK: Yeah. Most of the time it’s always super positive. It’s the time one person says something [negative, that you remember] which is just human nature, isn’t it?

I heard that you’ve already prepared a speech for winning album of the year at the Grammys. Is this true?

JG: Oh, have we! Yes. We literally do that every day. In our first band practice we did that.

LP: Yeah but we’re going to save it.

PK: It’s a work in progress but a lot of times when I’m in the shower I get interviewed by Jimmy Fallon in my imagination [laughs]. Or Ellen. Sometimes I imagine what Ellen would ask me. It’s so dumb…

No! It’s funny. But what happens if you win the Grammy but Beyoncé was also nominated. Would you do the honourable thing and just hand it over to her?

All: No! Definitely not!

LANY's debut album is out tomorrow (30th June). You can listen to 'Super Far' below: