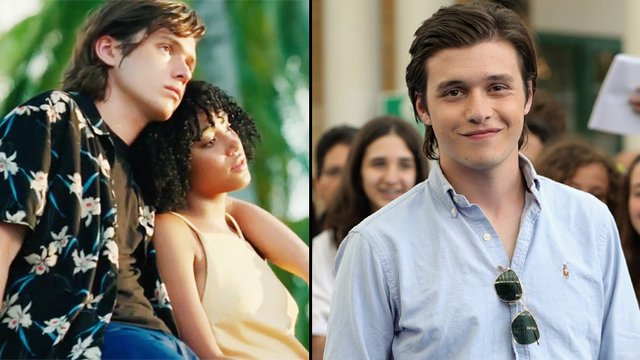 The 'Everything Everything' actor talks upcoming projects and his star studded past. Plus, who was his first celeb crush?

Nick Robinson is one of those actors whose face is always oddly familiar. Perhaps it's because of his recent exposure in blockbusters like Jurassic World. Maybe you remember him from the Disney Channel original movies of your youth. Or maybe it's because he, like a cross breed of Evan Peters and a latter day Ansel Elgort, has that easy, boy next door look and charm that puts an audience at ease and inspires a million tumblr fanfics and stan accounts in the process.

And now Nick looks set to break through to a whole new level of fame, taking on one of his most high profile leading roles to date in the screen adaptation of Nicola Yoon's YA novel Everything Everything alongside Amandla Stenberg. We caught up with Nick to talk through the project, reminisce about his former Disney castmates and predict the future as his star continues to rise.

PopBuzz: Were you familiar with the original book before you got involved with the movie?

Nick: I read the script before I read the book and then I was introduced to that beautiful story by Nicola Yoon and her take on the teen romance. And what I really liked about it is the fact that it was an interracial couple which I thought was...it was something I hadn't seen before in this genre and it actually hadn't been done before. And talking to Nicola, she actually wrote the story for her daughter Penny because she didn't feel like there was enough representation for a biracial lead. So to do a story that had this interracial couple but didn't address it, I thought was very interesting and something I hadn't seen before. Because usually in a story like this, when there is an interracial couple that is the story. The plot goes along telling how these two somehow managed to come together. Whereas with this it's not addressed which I feel is a powerful message and something that people should see. Something that felt relevant.

PB: You have such great chemistry with Amandla throughout, how was it developing that relationship for the screen when you'd never met before?

N: It was very easy to get along with Amandla, she's really a wonderful person and a wonderful actress and so that came fairly naturally. We met briefly in LA after we'd both been cast and then once we got to set things just sort of unfolded in what felt like a very natural way. We'd hang out quite a bit, we had about a week before we actually started shooting to just get a feel for one another and hang out. It worked out great in terms of developing some chemistry.

PB: The soundtrack also plays such a key part in the movie, were there any particular music choices you enjoyed?

N: One of my favourite scenes actually is when Maddies comes outside for the first time and 'Sound and Color' starts playing. I think it's a great sequence. So that was all Stella (Meghie, the director). I think Amandla and I sent her some songs, Amandla especially put together a playlist and sent it to her. So there was some input but a lot of it really did come down to Stella and I know she fought to make sure that the songs that she wanted stayed in the movie.

PB: So just to look back at some of your previous work, you have a big Disney connection in Frenemies alongside Bella Thorne and Zendaya, are you still in touch with those guys at all? Do you check in occasionally?

N: No, I haven't talked to either of them in a while now. I saw Zendaya at an awards show recently and it was fun to run into her but we don't really keep in touch.

PB: Have you seen her in Spider-Man: Homecoming yet?

N: No, I'm the one person on the planet who hasn't seen it yet (laughs). I'm hoping to see it when I get back home.

PB: You were in Jurassic World too which was your first major blockbuster, how was it adjusting to that new level of big budget movie making?

N: Well it was definitely a challenge, it was daunting. But I was excited to be a part of it, some amazing people were involved and I tried to approach it as much as I could just like what my experience before had been which was mostly independant films or smaller movies. It was a wonderful work experience, great crew, great cast. Really couldn't ask for more. The main difference I found...I mean the size and scope of it was nothing I had encountered, but the food was much better. Much better catering (laughs). An army moves on its stomach right...and to be in a lego set was kind of a dream come true so no complaints there, that was pretty cool.

PB: Up next for you is Simon Vs The Homosapiens which sounds fantastic, can you tell us a bit about what to expect?

N: Yeah I finished that a few months ago, I'm excited for people to see it. It's a coming of age story set in high school like we've all seen sort of a million times before but the difference is that this time it follows a character's journey coming to terms with his sexuality. So the lead of the film is a gay character which, again, I hadn't seen before so it was something that I thought it was high time it got made. I'm excited for people to see it and to see what the reaction is. I think it's high time the LGBTQ movement had a film like that. It's coming out March of next year.

PB: And your co-star is Katherine Langford, how was it working with her?

N: She's great. She's a wonderful actress. Actually when we started filming, 13 Reasons Why had not come out yet so she had talked about it but nobody knew what it was going to be and then it came out and there was a big response to it. And she's well on her way.

PB: Ok, to wrap things up, these are the 'Confession Booth' questions we ask everyone who comes in. So first of all, what was your first ever email address?

N: Haha, that's funny actually. My first ever email address was skipper.57@hotmail.com. Don't ask me why, I have no idea. That's just what happened. I think I was 12 or 13.

PB: When was the last time you dropped food on the floor and ate it?

N: Probably this morning. It's something that happens fairly consistently in my life I'd say.

PB: Lastly, who was your first ever celebrity crush?

(Of course we remember Xena!)

Everything Everything is in UK cinemas from August 18th.