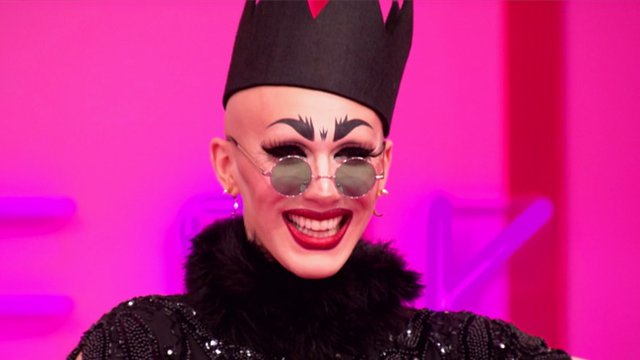 RuPaul's Drag Race season nine winner Sasha Velour recently sat down for the PopBuzz Podcast and she spilled all the tea on her life since the show, her feelings on Aja's performance in the current series of All Stars 3, and how Jughead from the Archie comics became unlikely inspiration for her drag.

Recorded at the Clapham Grand in London during her first UK headlining tour, Sasha spoke about how the Archie comics became an important part of her childhood. "I used to get the Archie Digest and read about heterosexuality and it’s many adventures. ‘Fascinating! What interesting types,’" she quipped.

"It’s very serious, isn’t it?", she said of Riverdale, the hit Netflix/CW show, which is the latest incarnation of the comics. "It’s like Archie but Twin Peaks. Cole Sprouse is very brooding. I’m always interested in different interpretations but for me 'Archie' and the Riverdale world is bright colours and tacky pop music. I do miss that a little bit but I also love taking things way too seriously."

Could Sasha Velour be Jughead’s drag alter-ego? Watch this space. "Oh sure, why not! It’s definitely the product of a strange loner who likes wearing crowns and spends too much time thinking and brooding, so to that extent it does make a little sense."

Elsewhere in the interview, Sasha gave us an update on her friend and former competitor in Drag Race season 9, Aja, who's currently KILLING IT on All Stars 3. "We're finally seeing the Aja I know in Brooklyn, and love. I'm so excited for people to see just what an incredible, unstoppable drag queen that she is."

Looking back on Aja's disappointing appearance the first time around (albeit with a couple of truly gag-worthy moments), Sasha had this to say about the different between Aja then and now. "The Aja I know is unstoppable and I think she was just into her head a little bit. Maybe being so young, too. It's so exciting to see her slay the game now."

Does that mean she'd like Aja to win? "Oh I don't really choose teams. I'm not really a sports person so I've never quite understood that. I just root for whatever makes me scream and in that first episode it was Aja, Ben and Kennedy that just brought the house down. It was incredible." What a diplomatic answer. Sasha Velour is a truly unflappable queen.

Download the full episode, including another chat with Sean Hayes from Will & Grace, on iTunes right here or listen on the player below.