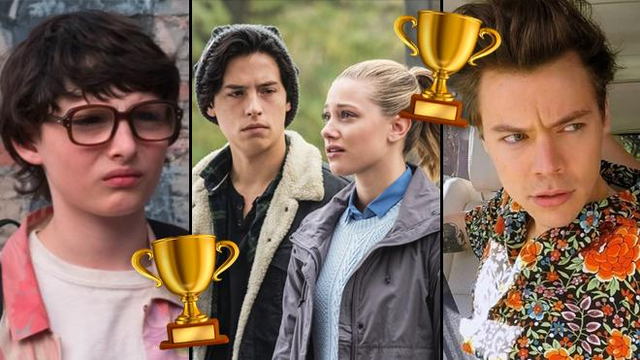 THE RESULTS ARE IN!

We asked and YOU voted in your thousands and now it's officially time to reveal who you crowned as the winners of the PopBuzz Fan Awards!

Who was crowned as villain of the year? Which TV ship had you sailing around the world on a luxury cruise? And who managed to snatch best music video of 2017? We guess it's time to bloody find out, right?!

You also voted for your favourite song of 2017 and favourite album and there was ONE artist in particular who managed to sweep both boards. We won't give it away but let's just say the he NEVER goes out of style...

AND THE WINNERS ARE:

Villain of the Year: The year 2017 itself.
Runners up: Jake Paul, the shadow monster from Stranger Things 2.

Hero of the Year: Finn Wolfhard, for being a legend.
Runners up: Rihanna, Michelle Obama and the interrupting kid from the BBC interview.

Badass Female of the Year: Ariana Grande, for putting on One Love Manchester.
Runners up: Sia, Serena Williams and Beyonce.

Best TV Plot Twist: When Clifford Blossom was revealed as Jason's killer on Riverdale.
Runners up: every episode of AHS: Cult, Spencer having an English twin on PLL.

Best Movie: IT
Runners up: Beauty and the Beast, Wonder Woman and Spiderman: Homecoming.

Best character from a movie that didn't flop: Richie from IT
Runners up: Baby Groot, Sebastian from La La Land.

Best music video: Charli XCX 'Boys'
Runners up: 'Look What You Made Me Do', 'New Rules' and 'Sign of the Times'.

PREVIOUSLY ON THE POPBUZZ PODCAST