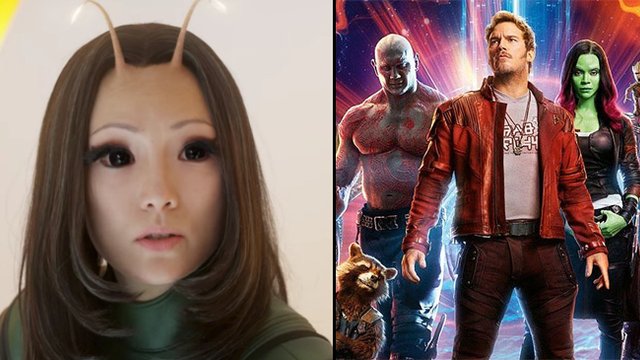 The Mantis actress reveals all about early nerves on set, comic con and working on the upcoming 'Avengers: Infinity War'.

Guardians Of The Galaxy 2 not only saw the return of all the Marvel heroes we know and love, from Rocket and Star Lord to a somewhat shrunken Groot, but it also introduced several new members to the team of space heroes that have already proven a huge hit with fans.

Perhaps most significant of these fresh faces was Mantis, the assistant of Kurt Russell's villainous Ego, who has the ability to feel the emotions of others through touch, as well as send them to sleep. We caught up with Pom Klementieff to talk joining the crew and what to expect next from her character as the Guardians prepare to join Avengers: Infinity War next year.

PopBuzz: Were you much of a fan of the first Guardians Of The Galaxy movie?

Pom: Oh yeah, I loved the first movie so much. I've always been a big fan of every Marvel movie and superhero movies in general, but this one brought so much heart and so much fun to it. I loved the music and (director) James Gunn's voice throughout the movie. So when I had the audition I was really freaking out.

PopBuzz: So, as a fan, were you nervous entering the crew?

Pom: Yeah I was a little bit stressed out the first time I did the table read, but everyone made me feel like I'm home and made me feel comfortable. They're all so sweet, the whole cast and the director. It just sort of felt like a family.

PopBuzz: One of the highlights of the film is all the great comic scenes you with Dave Bautista, how was it working with him in particular?

Pom: Oh it was great. He's a gentleman. If there's a problem, he can protect you 'cos he's strong but he's also really sweet and really soft. He's soft spoken. He's a great person and we had fun playing the scene. We rehearsed, I did the screen test with him so I'd done the scene many times before we did it for the movie, before we shot it.

PopBuzz: So can we expect more of that great dynamic between you guys in the future?

Pom: Yeah completely, first its gonna be Avengers: Infinity War and then I'm sure in GOTG Volume 3. You might get tired of us at some point, I hope not (laughs).

PopBuzz: One of the big rites of passage for anyone joining the Marvel movies is going to Comic Con, how was your first experience there?

PopBuzz: Now that you are working with the full Marvel crew, do you have a favourite Chris? Pratt, Hemsworth or Evans?

Pom: I don't know if I have a favourite, they are all great. I loved meeting Mark Ruffalo, I think he's an incredible actor and he's really nice too. And I was happy to work with Josh Brolin again 'cos I worked with him on Old Boy years ago.

PopBuzz: So when filming wraps up for the day, do you all hang out as an Avengers crew? Are the superheroes hitting the bar together?

Pom: (laughs) We haven't done that yet, no. People usually go home, they go to their families.

PopBuzz: Lastly, we have to ask, what was your favourite song on the 'Awesome Mixtape' from the movie?

Pom: Oh my god! I never know what to answer for that question. I think it's probably 'Father and Son', that moment was pretty moving in the movie. It's beautiful.

GUARDIANS OF THE GALAXY VOL 2 is out on DVD September 4th.