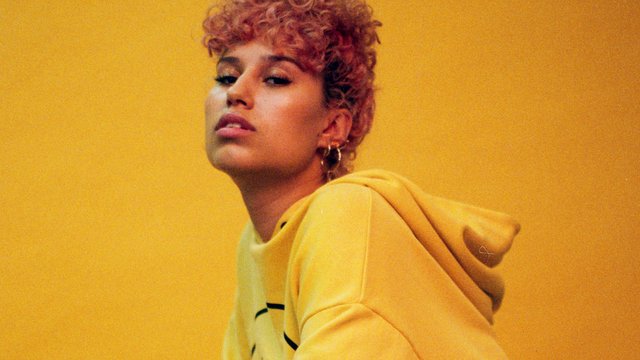 As the singer gets ready for a full season of outdoor gigs, we chat her banging single 'The Line' and why she had a crush on Zac Efron.

Raye, everyone's favourite summer songstress, is back with a truly LIT new single and a handful of festival dates throughout the summer that are sure to get the party going everywhere from Manchester to Magaluf.

So, we caught up with her ahead of her appearance at Parklife Festival to talk music and, of course, to make her sweat in the infamous PopBuzz Confession Booth.

Here's how it all "went down".

PB: What was the inspo behind 'The Line'?

Raye: I remember being in the line for a club a few years back and I had my favourite trainers on and a t-shirt and it took me ages to get ready. I was queued up for ages and then the bouncer at the door was like "no, you're not coming in". So I was so upset...and then I kinda looked around and I saw the females in the club world, the way girls are expected to dress and behave, it's just so outdated and so boring. Like you have to wear heels and dresses and look really formal and blah, blah, blah. So I was really upset about it so I wrote the song, that's kinda the inspiration behind it.

PB: There's not many anthemns out there about waiting to get into the club...

Raye: We spend so much time waiting in line though - we're Londoners for crying out loud, everything is a queue.

PB: What's your summer banger recommendations at the moment?

Raye: i really like 'Lost On You' by LP. I dunno if its a summer banger but its really euphoric and really beautiful. And I'm just looking through The Marshall Mathers LP by Eminem. I'm kind of rotating that, a bit of Erykah Badu and...yeah that's kinda where I'm at.

PB: What's your advice for anyone going to their first summer festival?

Raye: Bring a ton of plastic bags, cos everything will get. Bring wellies - don't think you can do it in trainers 'cos you can't. Invest in a good tent because honestly you'll be really grateful that you did. And bring lots of little snacks and stuff.

Raye: I either say sweet and salted popcorn or a pack of hobknobs - the chocolate ones - or if you're really going in bring a little gas fire and baked beans and bread. Just go all the way.

PB: Ok these are the questions we ask everybody - the Confession Booth qs. What was your first email address?

Raye: Ok, it Rachelkeen@gmail.com, it's not actually that bad.

PB: When was the last time you picked food off the floor and ate it?

Raye: Oh god, you know what? I'm pretty gross but I'm a massive believer in the 3-second rule. But, like, it just depends what drops on the floor, if it's like a crisp then I'll eat it up.

PB: Who was your first ever celebrity crush?

PB: What's the most embarrassing fashion choice you've ever made?

Raye: Everything at the time I really loved, but I mean, the things I used to wear when I was young...Ok, on my last day of school, my first school before I went to Brit, I wore this like, red and white stripey skinny jeans  with a Batman top and this awful, awful orange jacket. I looked like something out of...I dunno, it was just awful.

PB: I think the Batman top saves that, it's a nice touch...

Raye: No, no it was a Batman crop top, it was even worse.

Raye plays Parklife Festival in Manchester this weekend alongside headliners The 1975 and Frank Ocean.