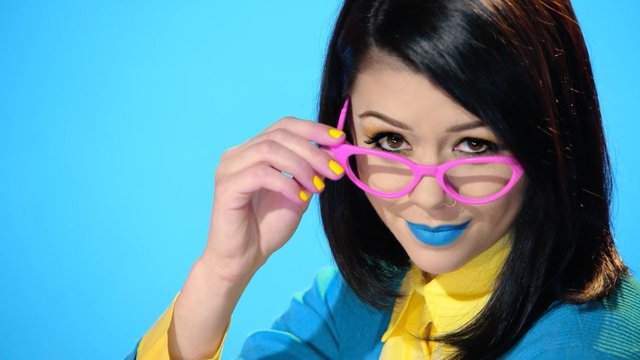 We Are The In Crowd's Tay Jardine chats her new EP 'Smile And Wave' and guides us through her journey from pop punk star to synthed up singer.

Pop Punk fans the world over will instantly recognise the name Tay Jardine, frontwoman of the incredible, powerful We Are The In Crowd who shot to fame within the scene thanks to their superb self-titled album a few years back.

But now, Tay is showing a new side to her as, much like her contemporaries in Paramore and Tonight Alive, she is exploring a poppier side to her sound with the 1980s-infused project SAINTE, who's debut EP Smile And Wave was released this month. With hooks the size of a stadium and bouncy, day-glo videos for singles 'With Or Without Me' and 'Eyes Are Open', Tay is ready to take the pop charts by storm. We caught up with her to chat new music, her unexpected recent collab with The Vamps and the art of marrying darker themes and lyrics with catchy melodies.

PopBuzz: So is SAINTE a solo project for you or is this a whole new band?

Tay: That's the hardest question because it really, you know, aesthetically is a solo project. But I'm still writing with Mike and Cameron (of We Are The In Crowd). So, it's sort of confusing but it's definitely more of a solo project than it would be considered a full band for sure. But it is pretty interesting - we still have trouble trying to figure out what to call it (laughs).

PB: Obviously, you came from the pop punk realm but this is moving in such a new direction. How was it transitioning into this new style? Is this the kind of music you were always wanting to write?

T: Yeah, I mean, it was really natural. I got into the studio, two years ago actually, and we stopped touring for a little while and just started writing. And everything was just changing. The music was changing; the lyrics were different. It just happened so naturally. I sort of looked around the room and we were like "this is something totally different. And if we really want it to say what it's supposed to say then the best way to execute this is by starting something totally new". And so it just sort of unravelled really naturally. I just, personally, was going through a lot at that time and trying to figure out how to be a 24 year old. And I was like "how do I do this"? (laughs). You know, just like everybody else grows up in those years. It was just a formative time for me and I felt like I needed to express myself and the guys were so on board with it because they had noticed me changing on the road and needing to just set free in some ways. So it really was super easy actually.

PB: And in terms of We Are The In Crowd, will there be a return to that stuff in the future?

T: We don't have any plans but it's definitely not something that we're throwing away.

PB: So your name has come up in a few interviews in the past with Lynn Gunn from PVRIS and Jenna from Tonight Alive - is a collab with the other women from the scene something you guys have talked about?

T: It's usually just something we talk in passing, like if any of us end up at each other's shows or texting each other saying "wouldn't that be cool?". But it's easier said than done, and especially now I definitely did venture out into a different type of genre. Not to say that it wouldn't work but it's interesting how things change. Even just like the different types of people who have hit me up or said we should tour together are totally not the people I would have expected with We Are The In Crowd.

PB: You mentioned about working through some personal struggles when making the SAINTE record. It seems like there is a similarity between the combination of upbeat sound and downbeat lyrics of your EP and the tracks on Paramore's recent record...

T: And you know it's funny because I just read an article about that yesterday and I had sort of known (Hayley Williams) was fighting with that. We were sort of liking each other's tweets when we would mention depression, just trying to share our experiences. So I kind of got that vibe and it is very interesting and it feels good not to be alone, especially in the music industry and as a woman. It is just a strange world (laughs). And in terms of it being poppy, these songs were written two years ago and I needed a really big outlet. SAINTE to me is like a place, it's where I can go to feel completely real but also stay happy.

PB: Speaking of getting poppy, you just did a recent collab with The Vamps, how did that come about?

T: So we had been online friends since the beginning of We Are The In Crowd. Connor especially was always a really big supporter. We continued to just have a Twitter relationship in that way, just supporting each other constantly. And he had messaged me on Twitter like "hey, I really wanna do something with you, I saw you did this cover of Lorde's 'Green Light', we should do something on YouTube". We just thought on it for a while then he came back with "well listen, each band member is doing a remix or a different song on the album and I would love for you to just do the remix of 'Middle Of The Night'" And I was like "absolutely". I had actually been on vacation in Florida when we decided this and I cancelled all my plans and headed to one of my friend's studios in Orlando and just banged it out. I actually just met (The Vamps) but Connor wasn't there which is really funny. I just met them recently at a show in New York and they're just the sweetest, they're the nicest dudes and they're killing it right now.

PB: Well, something we get everybody to do when they bring out a new record is to sum it up in three emojis. So, which ones would you pick for Smile And Wave?

T: Ooh, that's amazing. Well it's actually easy because it's called Smile And Wave, so I would do the upside down smiley face and then the waving and then...and then a...heart!

Smile And Wave is out now. SAINTE plays UK dates in Manchester and London this August.