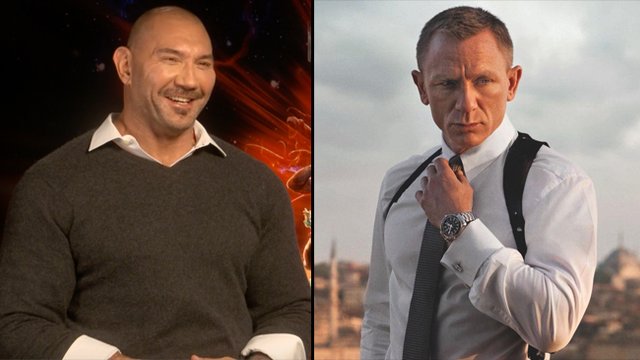 The 'Spectre' and 'Guardians Of The Galaxy' star has an idea of who should take over if Daniel Craig decides to step down.

Dave Bautista, the actor, wrestler and all-round good guy, has revealed his pick for who should take over the role of James Bond after Daniel Craig.

Dave was in town to promote Guardians Of The Galaxy Volume II when we sat down with him for a chat on the PopBuzz Podcast to quiz him about Drax's make up regime, dancing Groot and his number 1 choice for the next 007.

Dave, of course, starred in the most recent Bond movie Spectre as the villainous Mr Hinx and while he certainly hopes that Daniel Craig can be convinced to return for another instalment, calling him the best Bond since Sean Connery, he did have some ideas about who could take over.

So who did he pick? Tom Hardy? Michael Fassbender? Idris Elba?

Catch our full chat with Dave as well as his GOTG castmates Chris Pratt and Zoe Saldana in this week's PopBuzz Podcast here.

Check out Dave talking about his pick for Bond in the clip below: