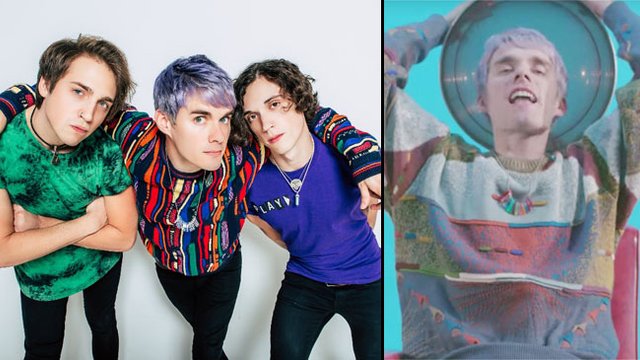 Awsten spills all the details on the group's upcoming second album and life on the road.

Texan pop punk trio Waterparks have had a truly stellar year since the drop of their exhilirating debut Double Dare. Having toured worldwide on the festival circuit and supported their forebearers in All Time Low across the UK, they return early next year with their new album Entertainment, the first single 'Blonde' having dropped earlier this month.

We caught up with lead singer Awsten Knight to talk through their new sound, life on the road and which track he's most hyped for you to hear.

PopBuzz: Let's start with the single - it's awesome! How did it come about? Talk me through the writing process.

Awsten Knight: Let's see...the chorus came about when I was actually doing some vocal warm ups and just playing around while touring on the headliner we did back in February. I was like 'hey, that's pretty cool'. So that was sort of the hook. And then I had around that time, like February and March, there were about maybe four total songs that were all about the same thing. It's all basically just four different versions of 'Blonde'. When I had a second off in April, it was fun to sit down and have fast vocal patterns worked out. Yeah, I just kinda built it up from there.

PB: Lyrically, it's really fun, playing with all these colours, was that in your mind when you were writing this one?

AK: It's more that I like it when writing feels more animated and colourful in general, even when it's not a happy thing. I like very descriptive, life-like lyrics ya know?

PB: So, in terms of the album, does it feel like a step up from the last record? Are there any kind of obvious differences?

AK: That song is closest to the last album. The reason we put it out first is because it kinda just has every element from the first album. It's all wrapped into one song. So I felt that it was still a step up in my opinion so it was kinda a nobrainer to put it out first. I always wanna see growing in everything but I want the transition to feel smooth. I don't want it to feel like a really jarring thing like 'what the fuck did I just do?' ya know?

PB: How has the rest of the record grown from Double Dare?

AK: Well, if anybody wants to call that song pop punk, the rest of them are just not gonna be that at all. Meaning that's probably not the hardest, angriest one but it's the fastest for sure as far as punky stuff goes.

PB: So what kind of styles are you hitting off? Is it a more straightforward rock vibe? More acoustic moments?

AK: Honestly, there's everything. It's like more rythmic stuff, a bigger band...it's like an electronic rock thing. And yeah there's acoustic things. There's some songs that don't have any real instruments at all. All electronic. Some are just angry rock, bordering on hardcore. It just kinda goes everywhere.

PB: You've spent a lot of time on the road over the last year, both headlining and supporting acts like All Time Low. Were you able to get much writing done on tour?

AK: Honestly writing on the road is kinda tough, you usually just end up getting a ton of lyrics and then go back and make music. The last couple of tours I've tried to make time and just sit with an acoustic guitar for half an hour everyday and just see how many things I can crank out. Just to not get rusty. But, yeah, writing on the road is a lot more difficult. Double Dare was mostly finished before we'd ever toured so this release was actually the first one written either on the road or in between tours...the thing is with these ones, all of them are bangers.

PB: Any particular track you are really hyped to get out and play live?

Waterparks' new album Entertainment will be released on January 26th 2018. They will tour the UK in March.