INTERVIEW: With Confidence Talk Growing Up With 5SOS & Enter Our 'Confession Booth' 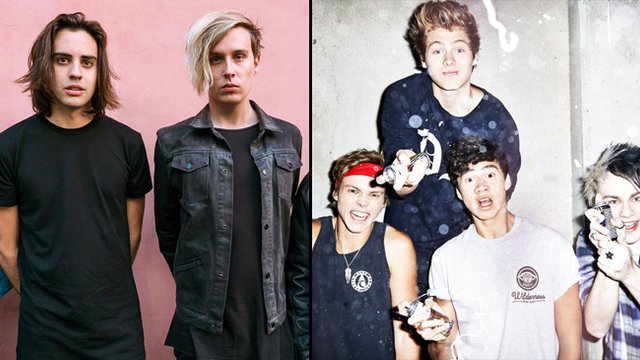 We chat with Jayden and Luke ahead of their huge upcoming UK tour.

Rising Aussie pop punk act With Confidence have been on an upward spiral ever since the release of their rather excellent debut album Better Weather last year. They have since completed their own headline tour of the UK and will return to our shores this May for an appearance at the always enjoyable Slam Dunk Festival weekend as well as a few special gigs alongside Set It Off.

We caught up with Jayden and Luke from the band to talk early musical memories, planning for the future and even got a few confessions out of them!

But first, there's the small matter of their childhood friends and occasional touring buddies 5 Seconds Of Summer.

So, how far back do you go the 5SOS boys?

Jayden: Josh (With Confidence drummer) and I studied music with Michael. Josh grew up with Luke and Calum, they went to like the same school. And after that tour I guess we did notice a bit of a difference in getting younger kids in who enjoyed the more poppier stuff of ours. But we love those dudes, incredible tunes, they're doing some cool stuff as well.

Luke: Nothing but positivity. Touring with them was an amazing experience 'cos it was our first experience of arena and stadium venues which we probably wouldn't have the opportunity of doing maybe ever. Or at least not last year (laughs).

And did they offer any advice while you were on the road?

Jayden: I wouldn't say they offered advice. I feel like when we were on the tour with them, there's just mutual respect between the two of us 'cos I feel like...we both sort of started out at the same time and fun bit of trivia - our first ever show that we played was actually with 5SOS when they were starting out. I think it was a 500 cap venue. So both sort of starting out at the same place in Sydney, I think even coming back and working together, we've both seen different parts of the music industry. They've skyrocketed into stadiums, we've done the driving around, so I guess we both learnt a bit off each other.

Luke: If anything, they offered us beer.

So how would you sum up touring with the band in one word?

Of course, we couldn't let Jayden and Luke leave London without a quick visit to our infamous Confession Booth. And their answers were surprisingly honest.

What was your first email address?

Jayden: Mine was jaydenrocks@hotmail.com (laughs).

Luke: I had the most cringey one ever, as an extremely big fan of Tom DeLonge, I think my first one would have been angelscar182@hotmail.com which incorporated all three bands.

Who was your first celebrity crush?

Jayden: Mine was Holly Marie Combs. I was like 8 or 9 and my sister always used to watch Charmed and I was like "that girl is so pretty, I don't understand why she's making me feel this way" (laughs).

Luke: Mine was easily Avril Lavigne. I remember the 'Complicated' video was my complete realisation of like "wow, girls are pretty" (laughs).

Have you ever stolen anything?

When was the last time you ate a food item off the floor?

Jayden: Earlier today. A bit of my pie fell on the floor so I just picked it up.

Luke: Also earlier today, Jayden was lying on the floor and he looked clean.

When did you last shit yourself?

Luke: Somebody else in our band, who might be next to me right now, on the last Uk tour...

Jayden: Not naming any names but someone in this band, right before we went on stage, little bit of poo came out and they had to play the whole show with a little bit of shit in their pants. Not gonna give away which show it was but it was the last time we were in the UK.

Here's hoping for a repeat performance when With Confidence tour the UK with Set It Off this May.