You've Got To See Gavin From "Shaytards" Covering Ed Sheeran 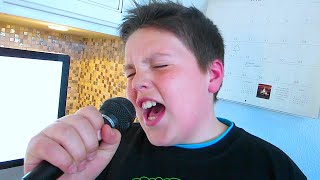 While YouTube's First Family the Shaytards tirelessly keep their 3 million-subscriber base entertained in a daily vlog, it looks as though one family member could go solo with a music career.

Proud dad ShayCarl grabbed his camera while Gavin "SonTard" Butler was playing around with a cover of Ed Sheeran's "Thinking Out Loud" because apparently, he was sounding pretty good - and from the recording posted to the channel as a bonus clip last night, we're inclined to agree. The dude is good!

Check out Gavin's full rendition of the song below. Bonus points if you can get through the whole thing without cringing at Shay's hyperactive camera/hype man work.

Now you've watch the Shaytards singing Ed Sheeran, here's a performance of 'Thinking Out Loud' that will ruin Ed Sheeran for you forever.