I'M NOT CRYING, YOU'RE CRYING.

It's a rare thing when the internet manages to use its power for good instead of evil. The story of Sean O'Brien, a man who was cyber bullied after daring to express himself through dance, piqued the interest of writer, Cassandra Fairbanks after the images went viral.

Sean's photograph was taken and uploaded to internet gutter, 4CHAN without his permission. The caption that accompanied the image referred to the Liverpool, England native as a "specimen" and was shared on and off the forum. 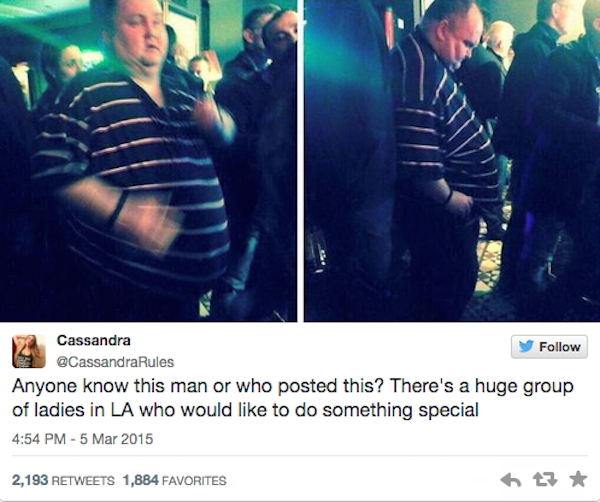 Through the power of twitter, Cassandra managed to track down Sean and began planning the dance party to end all dance parties. Sean caught wind of the campaign and made himself known to Cassandra and all those who had been on the look out for him.

Thankfully, locating him was not the end of the story.

Sean and Cassandra have become quite good friends since they found one another and the party she threw for him will put a never ending smile on your face.

To the twitter world. Thankyou for being interested and making this what it is. So much good in the world we sometimes forget

I can't tell you how sweet these moments were, and how perfectly @theyodsukars captured them. pic.twitter.com/iDtMHEjgV9

Sean got to meet the people who had been campaigning for him all these months, party with beautiful models, meet the Dodgers, and dance his ever loving heart out. Sean's happily ever after is the perfect ending to what could have just been a sad cyberbullying story.

I love you too, so much. I'm so glad you are here, and sad it's the last night we get to hang @Dancingmanfound @HOPELEIGHMUSIC

See what happens when we're all nice to each other? If you think that's sweet, find out why Foo Fighters' Dave Grohl says he is "obsessed" with Taylor Swift.