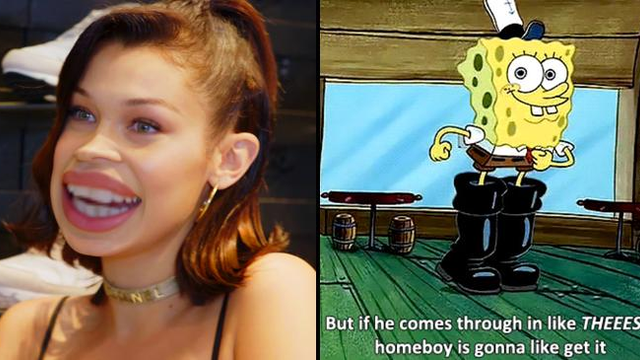 "But if he comes through in like, theeeEEEse, YOU GOT SOME AIR MAXES OUT HERE, got some JooRDAAANS, homeboy is gonna like..."

Bella Hadid has been turned into the latest savage 2017 meme after her appearance in Complex's latest Sneaker Shopping segment and it is, quite possibly, a top contender for meme of the year.

In the video, Bella explains how the sneakers a guy is wearing can either make it or break it for her and now the internet is absolutely ROASTING her for it thanks to her unintentional yet ridiculously excessive use of the words "homeboy", "fresh" and "dope" within a 45 second time frame.

If you've never heard Bella actually talk before, then strap in because this video is about to take you on the journey of your LIFE.

Needless to say... the memes were out of control.

Bella actually sounds like she's auditioning for a role in 23 Jump Street.

No but how many times does she actually wanna say it?

All the times Bella hadid said homeboy and dope in that sneaker video pic.twitter.com/7DLmnCPRDr

Has she ever spoken to another human in her life before?

But if he comes through in like, theeeEEEse, YOU GOT SOME AIR MAXES OUT HERE, got some JooRDAAANS, homeboy is gonna like

Dank memes? Keep them. Dope memes? Come ALL THE WAY through.

if homeboy is coming through with commitment and communication

if homeboy coming through with these.... pic.twitter.com/JBkDKShP0T

Say 'Air Max' in the mirror three times and you will GET IT.

legend has it if you enter a dark room with nike airmax shoes on , bella hadid will appear and you're gonna ᵍᵉᵗ ᶦᵗ

Oh sweet dope one, it's been ever so quiet out here in Beverly Hills. Please return in haste.

when will my dope homeboy return from the war its been real quiet w/o him *sigh* pic.twitter.com/XLi1GTOf5O

*gazes off into the distance*

thinking about my dope homeboy pic.twitter.com/ldsSmVSyG4

Forget the Jordans, forget the Air Max. Show me your interest in a government we can all believe in.

But if homeboy comes through with like..a Labour Party membership card...homeboy is gonna like...get it

Oh Bella, what have you done?

bella hadid when she sees a homeboy in some air maxes pic.twitter.com/UnAmD5x8dO