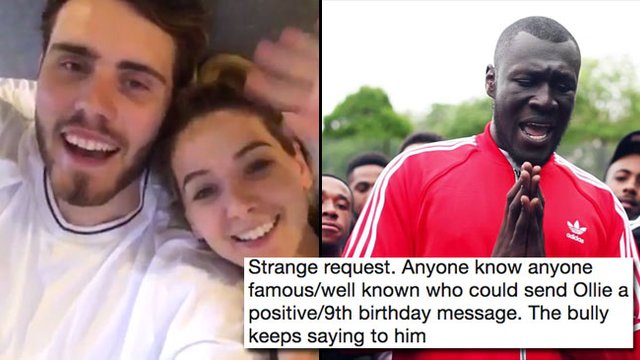 Zoella, Russell Crowe and Stormzy were among the well-wishers after young Ollie's Dad posted a message on social media earlier this week.

Well, if anything is going to brighten up your week, it is this story.

Earlier this week (June 28th), a Twitter user named Christopher posted a heartfelt request on behalf of his son Ollie who has been having a rough time with bullies at school:

Strange request. Anyone know anyone famous/well known who could send Ollie a positive/9th birthday message. The bully keeps saying to him

that everything O has, he has bigger/better/more often. O excited for his birthday but keeps being told it won't be as good as his own

I would be so grateful and I appreciate it is an odd request. Just would love someone to tell him he does mean something & bullying is not

Well, wonderfully, within just a few hours, the tweet had really taken off, with over 12k Retweets and 30k likes at the time of writing. TV presenters, YouTube stars, musicians and more began sending their birthday wishes. In short, it was pretty damn amazing.

Here are just a few of the many huge names who send their love on Twitter to young Ollie:

Happy birthday Ollie! You're a lil legend. Don't watch the bullies they always end up being the biggest wastemen later in life

Fancy coming to see us in September? Let us know and we'll make it happen.

Ollie---have a great birthday. You've got a great Dad. And remember people are really lucky to have you as a friend.

Happy Birthday Ollie from a guy on @TheSimpsons who's not quite famous but draws a kid who is =) I hope you have an AWESOME day! pic.twitter.com/f7itI4XdfW

a big group of people the other side of the World to say a big Happy Birthday to Ollie from Kenya pic.twitter.com/gCq3XWLnZT

Hopefully we can help #passonthepositive, Christopher

Have a brilliant 9th birthday Ollie, from all of us here at Arsenal pic.twitter.com/vucpAdtqx6

Happy birthday Ollie from middle earth. Hope you have a great day and the best year ever. Lots of love, Peregrine 'Pippin' Took x

Follow the original thread on Twitter to see the hundreds (yes, hundreds) of well-wishers who came through. Don't know about you guys but our faith in the world just got pretty restored.

Happy Birthday Ollie, we're sure you are gonna have an awesome day!