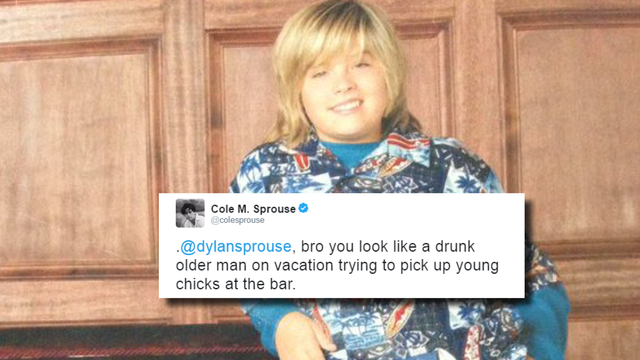 If you follow Cole and Dylan Sprouse on Twitter you'll know that the two are constantly trading light-hearted shots at each other. Our favourite thing about this brand of brotherly love? The savagery is just too good to ignore.

3) He's not messing around.

.@dylansprouse you keep talkin and I'll introduce you to some: pic.twitter.com/GLXIXnoVan

.@dylansprouse, bro you look like a drunk older man on vacation trying to pick up young chicks at the bar. pic.twitter.com/JcAg6D7q5A

@colesprouse you look like the young chick at the bar

5) Is anyone going to ask why he was googling "weird Sprouse"?

7) For anyone who has trouble telling the difference between Cole and Dylan.

"Oh hey, didn't see ya there. I was so busy looking at my phone." -Cole, at every meal https://t.co/yXIOh62KRy

10) Cole is out here revealing the family secrets.

I'd like all of you to know that our grandma used to put @dylansprouse on a baby leash. I'd also like you all to know that I never needed it

.@dylansprouse were you Zack or Cody?

.@colesprouse I don't remember actually. I was too busy carrying the show on my back

12) I have referenced this tweet about Dylan's ~nudes at catholic confession on no less than 5 occasions.

@dylansprouse Cold in that bathroom huh?