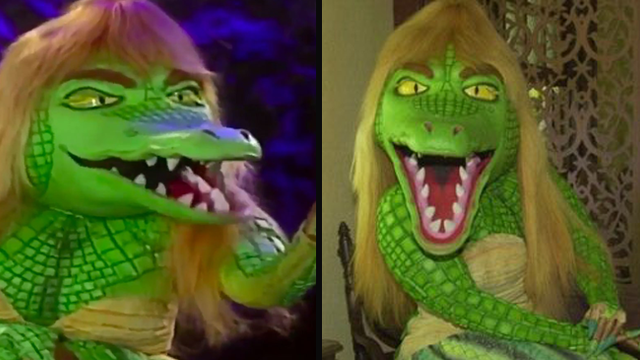 Someone call The Babadook and let him know he's cancelled.

Less than two weeks after The Badabook was adopted as a gay icon just in time for Pride Month, he has been replaced by a Cuca, a sassy alligator (she's not a crocodile, ok?) who looks like she'd be the one to receive the dreaded villain edit on RuPaul's Drag Race. Yes, Cuca - the subject of all those hilarious GIFs on your timeline - has arrived and she is EVERYTHINGGGG.

Where did Cuca come from?

Cuca, a witch who manifests as an alligator wearing a blonde wig, appeared on a Brazilian children's TV show called Sitio do Picapau Amarelo in 2001 until 2006 but she's actually been around for a lot longer than that. Your new icon first made waves in Brazil back in 1921 and has been a cultural icon ever since.

WHO IS CUCA? Here's all you need to know about the next great gay icon: pic.twitter.com/yQTkAPKfTM

The first few appearances of Cuca on social media happened on June 15th...

And the rest, as they say, is HERstory.

Someone call the Babadook and tell him that he's been cancelledT.

Cuca is literally the sassiest, shadiest Alligator you will ever met.

"Now bitch you know I ain't one to gossip so you didn't hear this from me let's be clear on THAT" pic.twitter.com/Xl2x3D0hft

She gives approximately ZERO fucks and WILL come for your man.

Miss Cuca has been already been adopted by the Drag Race community.

Hola mis amores! Would you like to see my cuca?! pic.twitter.com/vl4y4i27Yl

"It's a lip sync, what part of that do you not understand?"

"GREEDY! Ooh! You know that I'm greedy for love." pic.twitter.com/Be94xEMWPm

Some have even compared her obvious penchant for tea to that of Queen Wendy Williams.

I am truly sick of y'all at this point pic.twitter.com/AtLDlFXbYF

Cuca has even made it into a Ditty remix.

Y'all have no idea how pleased I am with myself LMFAO #Cuca pic.twitter.com/I5XoLFum1o

She may have been around for almost 100 years but she know's what's good.

First #Babadook and now #Cuca we are truly living in the golden age of gay icons pic.twitter.com/FR206n6Axr