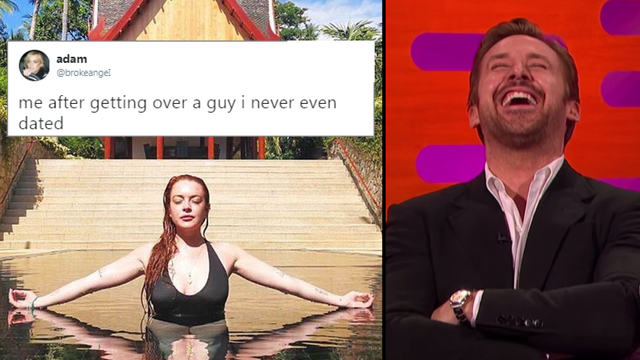 cashier: thank you for shopping with us

"Wow 3 tattoos.. those are pretty permanent you know"

Me: wow 3 kids... those are pretty damn permanent CAROL

when you walk back into the sesh after throwing up pic.twitter.com/xTXyxORyYc

me after getting over a guy i never even dated pic.twitter.com/6Sp79rxbfq

5) Me at uni at 3 am when I should have been writing an essay.

Yo is it just me, or does Beethoven - Symphony No. 5 low key slap pic.twitter.com/UpMUmHtezb

6) Lorde comin' in hot with the relatable™ tweets.

kinks include: disappearing, being unreachable by phone

me trying to get my life together pic.twitter.com/ILhjAfhZVY

Roommate has date coming by later and asked me to clean bc he's not home. So I made a Princess D shrine in his room pic.twitter.com/wfOeVUm7yW

my body: WATER please I need it
me: you - you want iced coffee??

10) sex lately has been weird for everyone, right?

*having sex*
HER: yeah baby, say it
ME: oh yeah?
HER: yeah, tell me what i like to hear
ME: mmmm text RESIST to 50409 to save net neutrality

girls these days at 2 vs. me when I was 2 pic.twitter.com/hnNXMBMQgo

Ladies you only have $5 to build the perfect man, wyd:

15)sorry but that's just my opinion

Call me old-fashioned, but I believe marriage should be between a person who hates pickles and another person who will eat that pickle.

Bill Nye just walked into our elevator while I was snap chatting.. pic.twitter.com/LwCOITAEft

Someone tell me why I thought this lady’s hair was a dog wearing sunglasses pic.twitter.com/rqrEoPg4RQ

FaceTiming the water so it doesn’t boil over while I’m watching tv in the other room. pic.twitter.com/9gWyG7AlcL

how did this picture just tell me it wants to know everything about me and then stop talking to me after two weeks pic.twitter.com/fZyOXzkCGI

21) This is the future that liberals want.

the year is 2040, country music is illegal, everyone is bi, and our country is united under our new leader; Gavin from Vine

22) someone check on this uber driver PLEASE

I think my Uber driver is in trouble pic.twitter.com/GxIsapbzyO

is it worth IT?
lemme work IT
i put my thang down flip IT and reverse IT pic.twitter.com/bwXBDA1WUj

me jumping into conclusions 5 minutes after i send a text and get no reply pic.twitter.com/a9nPZSYwKV

Me setting my alarm for every 5 minutes in the morning pic.twitter.com/TjCBc9hPcY