Has The Internet Made Us Mean And Dumb?

This guy sure thinks so.

It is a truth, universally acknowleged, that Aaron Sorkin may be one of the best film and television writers of our generation. His characters are uniquely passionate, flawed, and nuanced. Simply put, homie can develop a character arc like one else. Unfortunately, Mr Sorkin isn't much of an internet guy and, judging from his latest statement on the subject, it doesn't seem like he ever will be.

Sorkin spoke to The Hollywood Reporter about sexism in Hollywood and went on a tiny little tangent about the big bad internet.

The Internet in general I find troubling. The anonymity has made us all meaner and dumber. This thing that was supposed to bring us closer together, I see it doing the opposite.

His opinion is not that surprising. Sorkin is 54 years old and became famous in a time when you didn't need the internet to bolster your success. But is he right? Is the internet making us meaner and dumber?

Well, Aaron has a point. The internet can be a mean and dumb place. The eye wateringly horrible things people say to eachother and the fact that you can write literally anything you want without consequence make the internet your problematic fav. In terms of actual intelligence, studies have shown that the internet can have a negative effect on your attention spans. Multi-screen culture certainly isn't good for us and social graces have definitely taken a hit since we all got smartphones. But I'd hardly call that dumbness.

I would also like to propose that, perhaps the meaner you are, the dumber you become (as illustrated by the handy chart below). 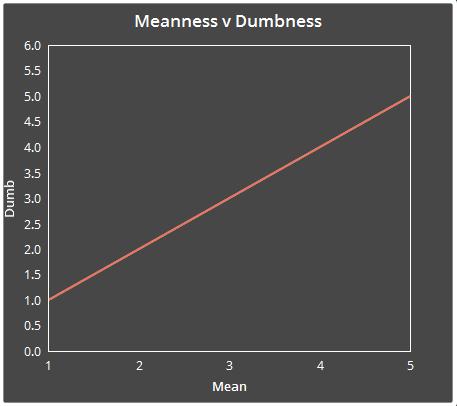 In all seriousness, Sorkin is wrong on this one. Despite all the pettiness and harrowing attitudes that reside on the internet, it's also a place where lots of cool stuff happens too. A lot of online activism, love, friendship, and problem solving takes place on the internet where it didn't before.

To say that the internet has made us dumber and meaner is baseless. Come on, Sorkin! Get it together!