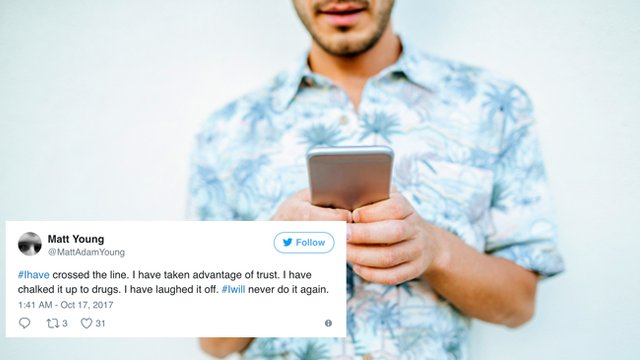 Honestly, what the fuck is this?

Not long after Harvey Weinstein was outed as a sexual predator by the New York Times and a long list of actresses bravely opened up about their experiences with the movie mogul, thousands of women started to use the #MeToo hashtag to talk about their own experiences of sexual assault.

Not content with women talking about their own experiences without making it about themselves, some men are now using the #IHave hashtag to admit to various behaviours, including sexual assault, that they’ve committed against women. The general sentiment behind these tweets appears to be that they want to acknowledge their behaviour and that by doing so will somehow make amends for it.

#IHave has received a fierce backlash from many people, although some think it's a "good first step" to becoming a better ally to women.

Men on the #IHave tag - a Twitter apology won’t do it I’m afraid. You better be handing yourself over to coppers tomorrow.

So rapists r tweeting #ihave and we're supposed to be, "you're only human, everyone makes mistakes." No.Go turn yourselves in or STFU #metoo

Dear #ihave posters. The honesty is a good step. Please don't expect likes and medals for it though. This only the beginning of your work.

There is the #ihave. I am ambivalent. If you are sharing stories about how you actually comitted a crime - please ffs go report yourself.

As you might have seen yesterday, we reported on the #HowIWillChange hashtag in which men were promising not to remain silent and actively fight to help women in meaningful ways. Fair enough, I guess. But the #IHave hashtag is something much more troubling and problematic. Forgiveness cannot be achieved through a hashtag and it certainly can’t be given by anyone other than the victim.

Anecdotally, I’ve seen two men on my timeline use the hashtag. One admitted to what appeared to be sexual assault and the other admitted to paying a woman for sex and, frankly, I’m astounded that they think this is an OK thing to do. It speaks volumes about the privilege that they and many men using the hashtag have that they can admit to this and get away with it.

The second problem is how some of these men have only just realised what they did was morally wrong. Why did it take the dethroning of a Hollywood producer to feel guilt about these acts, or to care/be aware about the treatment of women in the first place? In some ways, the Harvey Weinstein saga feels like a breakthrough moment in which a lot of difficult conversations are taking place which could, eventually, lead to some positive outcomes. But it’s so depressing that it needed to happen in the first place.

Are these men are tweeting out of compassion, or is just fear? Because if it's the latter then the authenticity of what they're saying is somewhat compromised. Hashtags can be fun and enlightening but there are some things they simply cannot do, and one of them is absolving people of their shitty behaviour.