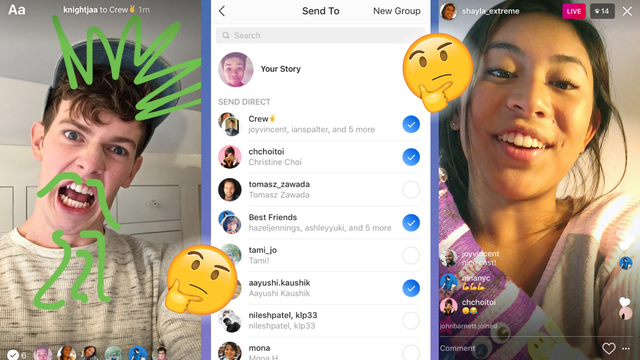 It's been a big year for Instagram. They have implemented an increasingly ambitious "video first" strategy with a little help from Snapchat. Not direct help, mind you. But there were plenty of ideas to be pinched from Evan Spiegel's 20 billion dollar app (sorry, Insta).

With live streaming, Instagram likely strives to be a direct competitor to the hegemony of Twitter's Periscope. Users will be able to host live video broadcasts, interact with commenters, and even send hearts. Very Periscope.

A push for this may possibly be in response to the new streaming app, Hype, which also hopes to become a viable competitor to Periscope.

With their previous update, users were able to tag photos and draw on Instagram stories. To advance that, Instagram will now allow users to send private video messages and photos in DMs. And, yep you guessed it, users will be able to make their content disappear and receive notifications when videos have been screenshotted.

"When you’re done, your live story disappears from the app so you can feel more comfortable sharing anything, anytime," say Instagram via their blog.

While mimicking features from other popular apps seems to be paying off (for now), it will be interesting to see which (if any) original features come to the app in the coming months.

What do you guys think? Are you psyched for Instagram's new video-based features? Will you be using them? Sound off in the comments below.