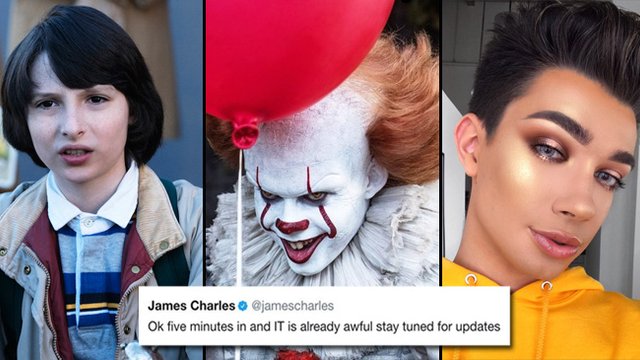 James has released a full video apology after the internet went to town over his phone activity during a screening of the hit horror movie.

Beauty YouTuber James Charles has been forced to apologise to the cast and crew of horror movie IT after he was called out by castmember Finn Wolfhard for tweeting during a screening.

Charles tweeted that he wasn't enjoying the movie, claiming to be 5 mins into a showing when Finn pointed out that maybe he would enjoy it more if he, ya know, put his phone down: Say it louder for the people at the back!

Charles quickly deleted his original tweet but, as we all know, the internet never forgets, and the exchange quickly inspired as many clown based memes as Twitter could handle:

finn calling out james charles is my aesthetic pic.twitter.com/fkt4tAPmOo

james charles: it was sooo bad lemme give you all updates
finn: pic.twitter.com/PLe2Je0CAx

I just got dragged by a legendary child actor I'm kinda honored https://t.co/mY1TkiHkML

But, after a seemingless endless stream of replies, he eventually released a short apology video, now claiming that he actually really liked the movie after all:

to address all drama regarding my comments on the "IT" movie pic.twitter.com/EtkNG474U3

Although, no matter who's side you are on, at least it looks like most of us agree that texting in the cinema is always pretty messed up:

RT if you have literally never texted or tweeted while watching a movie in a theatre. https://t.co/2qzQ7vkGt1

Our faith in humanity is restored!

IT just had the biggest ever opening box office weekend of any horror movie with a sequel already in development.