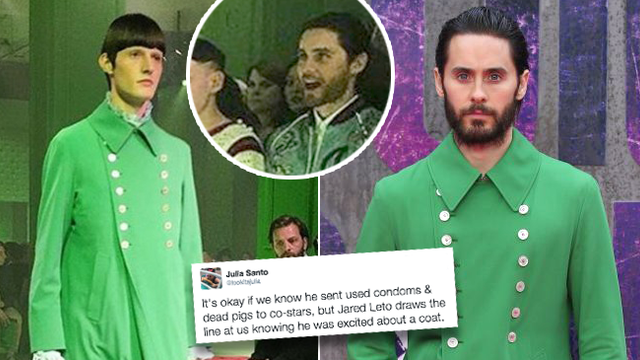 Academy Award Winning Meme-Killer Jared Leto doesn't want anyone else to have fun.

Remember the other day, when Jared Leto showed up to the European premiere of "Suicide Squad" in the most glorious green Gucci coat that Buddy the Elf could only dream about? He paired it with some pink trousers and a pair of classic Gucci loafers. It was a look that literally only Jared himself could pull off.

Well, it wasn't the first time Jared had encountered the coat. Twitter remembered that it was a sunny Monday in June when Jared first laid eyes on the green beauty at Milan Fashion Week, where he greeted the coat with the same look we all had when we saw those TayTay McHiddleswift pictures.

And thus, a meme was born - a beautiful one at that.

In fact, it was the purest, most spectacular meme we have ever seen. The truest of love stories captured in three screenshots. A meme that made the internet believe in love at first sight.

I want someone to look at me the way Jared Leto looked at that coat.

When you've found the one. https://t.co/yoDXo1kTOr

OMG! Have you heard the #PopBuzzPodcast yet? Don't miss out - listen now!

But like all nice things, the meme dream was cruelly snatched from our hands by The Joker himself. Not long after the premiere, Jared interviewed with Vanity Fair to reveal the "truth" behind the meme and he did not spare a single one of our thoughts.

"The thing about the photo is — I’m going to be honest with you — I was actually making a face at someone across the runway. I have that feeling with most things [Gucci] makes because they make such beautiful things. But I was actually goofing off with a friend, and you can’t actually tell from the picture. Sorry to ruin your meme."

For someone who says they're sorry, he doesn't actually soouuuund that sorry. #LoveIsMeaningless

What kind of cruel tri -- Actually, you know what Jared? How dare you.