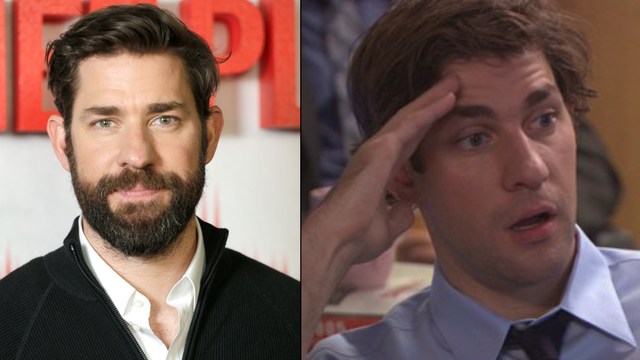 "Can't stop thinking about John Krasinski with that beard."

Most of you will know John Krasinski from his 9 season run on NBC's The Office. Fans fell in love with him as the charismatic Jim Halpert but something about John has changed and it's sending the internet into a bit of a thirst spiral.

John and his incredibly talented wife, Emily Blunt, just made a film called A Quiet Place. So far, the reviews have been glowing and it's even inspired comparisons to an iconic scene from The Office.

It's not just John and Emily's incredible performances that people are taking notice of. Some folks have realised that John's movie beard is actually a gift to all mankind.

cant stop thinking about john krasinski and his beard pic.twitter.com/0b3CQFTl5Y

john krasinski with a beard. rt if u agree pic.twitter.com/7aupunxn4W

Not even THE Emily Blunt is immune

find someone who looks at you the way emily blunt looks at john krasinski's beard pic.twitter.com/7ONHiGJog4

John's beard was a scene stealer.

JOHN KRASINSKI HAD NO BUISNESS LOOKING AS FINE AS HE DID WITH HIS BEARD AND RUGGED BEAUTY IN A QUIET PLACE pic.twitter.com/SB8JdmcJqz

just when I thought Jim Halpert, aka @johnkrasinski , couldn’t get any hotter... he goes and grows a beard and makes a masterpiece of a movie

And we're 100% sure John knew what he was doing when he cultivated that facial hair.

john krasinski when he decided to grow a beard pic.twitter.com/Jd06zPhSdD

can't stop thinking about john krasinski with that beard pic.twitter.com/B4WVaESzhF

If living in a soundless dystopia meant John Krasinski would have a beard all the time, sign me up.