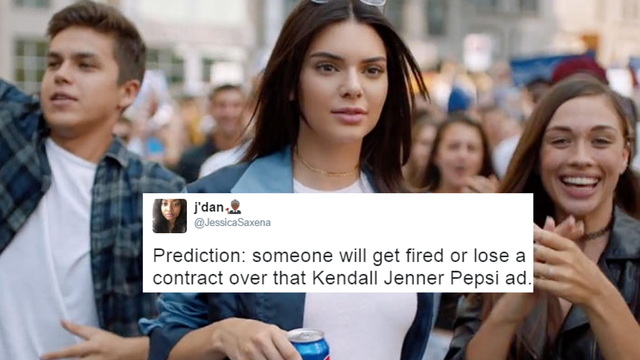 The star is facing backlash for participating in this "shallow" commercial.

Pepsi and Kendall Jenner are feeling the heat, after a recent advertisement invoking protest imagery was poorly received by the internet.

Using Kendall Jenner in an ad isn't a new play for big companies. It's suggested that a single sponsored Instagram post can earn her about $300k. Companies are clamoring to use her famous face for some social love, but perhaps one of the most privileged women in America isn't the right fit for this particular concept.

Kendall Jenner gives a Pepsi to a cop and rids the world of -isms. Y'all can go somewhere with this tone-deaf, shallow and over-produced ad. pic.twitter.com/CEr4cAw3Ld

The optics of this are bad.

As people have pointed out, Kendall is a rich white woman for whom the stakes are relatively low. Following the highly publicized marches and protests at the beginning of the year, people began touting the phrase "protest is the new brunch". But, for so many, protest is more than a replacement for your Sunday hangover meal.

It's about the power of being a body and a voice in a crowd. It's about showing up so that it becomes obvious that a cause is worth your time and energy. It's not about passing out beverages to cops. 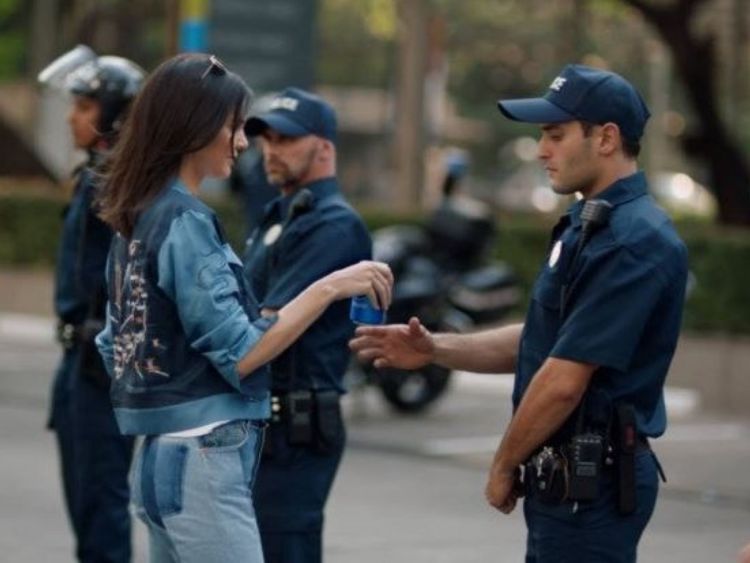 In the past Kendall has spoken about the possibility of using her voice for social change, and no one can knock her for that. However, collecting a cheque for pretending to be a part of a protest, when real protesters are being teargassed, arrested, and villainized doesn't sit right with a lot of people.

Kendall Jenner's Pepsi ad is a direct view into how WhiteCorporateAmerica sees our struggle.They are blind to it. Don't y'all ever forget it

There are no gatekeepers for social justice movements. If a celebrity wants to join in a cause that could help people, we should all be here for it. But every last part of this ad displays a criminally aggressive level of tone deafness that cannot be ignored.

When done right, corporations can make ads that reflect the political or social mood of the day. When done wrong, you end up with an ad that co-opts political activism, makes POC secondary characters in their own narrative, and actively seeks to erase the struggle of fighting oppression.

Also, guys, seriously. Stop drinking soda. Have you never seen those videos showing how much sugar is in those things? Love yourselves.