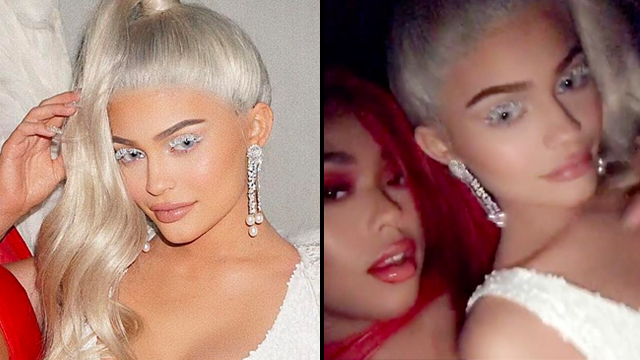 Kylie Jenner's Halloween costume has sparked a complete meltdown on social media this year but not for the reason you'd expect.

It is a known fact that Kylie constantly serves some of the most iconic and mind-blowing Halloween costumes every single year without fail but she's kept a relatively low profile over the past few days.

While she did dress up (as Fire and Ice with BFF Jordyn Woods), Kylie didn't post a single full body picture of her look and it's raising a lot of red flags for her fans on social media. Why? Well, it's mainly because Kylie RARELY misses a chance to show off her killer bod - and multiple costume changes - on Halloween. And this year, she's flown right under the radar.

Thanks to the video above - and the fact that she only shared one 'above the boob' photo on social media - fans are calling the entire thing a conspiracy.

When has Kylie Jenner ever given up the opportunity to show off her body especially on Halloween?? She’s definitely pregnant

Kylie Jenner only posting halloween pictures of her boobs and up.. Just tell us you’re pregnant already

If Kylie Jenner doesn't dress in something half naked this Halloween... she's definitely pregnant. Why do I care.

Kylie could of course just be playing along with Kris Jenner's PR game by keeping speculation around her pregnancy going until they're ready to address the reality (or the false rumours) on Keeping Up With The Kardashians.

Or you know, she could just not wanna play that kind of role on social media anymore? Whatever the case, we're gonna need a full body snap of her Halloween look ASAP because it looks AMAZING.

Jason Derulo's TikToks are out of control

JoJo Siwa keeps roasting her haters on TikTok and it's hilarious