15 Times Riverdale's Lili Reinhart Was The Undisputed Queen Of Twitter 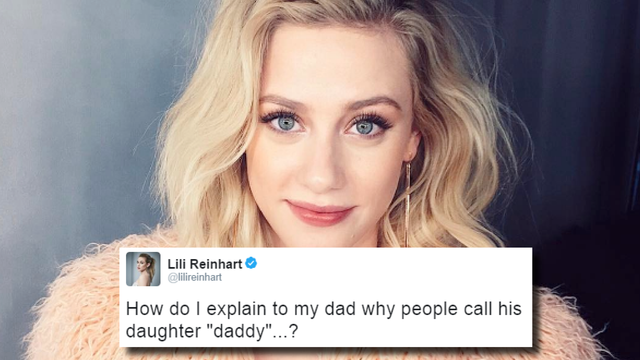 If you're not already following Riverdale's Lili Reinhart on Twitter then I hope you get it together and learn to love yourself. She is truly a gem, as evidenced by her incredible timeline.

Fuckboi: "Hey if you don't appreciate me then I'm not gonna stick around"
Me: #riverdale pic.twitter.com/GJ3xlTliD6

2) She also knows that KJ Apa is universal eye candy.

3) Lili is extremely not here for body shaming ugliness.

Excuse me while I go chase down the ice cream truck while you're at home hating yourself. Warmest regards from my cellulite X

4) Have you guys ever heard of fashion?

5) When you're such a meme queen that even your parents can't deny it.

My mom just called me "meme queen" so looks like I made it guys, I got the official stamp of approval from Mama Reinhart pic.twitter.com/IUxWLVxoEv

6) The pizza roll struggle is real and Lili GETS IT

When I burn my pizza rolls in the oven #riverdale pic.twitter.com/O0qidhOUSs

*listens to a fuckboi try to come up with an excuse for his fuckboi-ways* #riverdale pic.twitter.com/adTjW2P6Kx

8) When you actually realize that 75% of L's timeline is about food and that really speaks to you.

When you remember there's an all new episode of Riverdale tonight... and also all of the Valentine's Day chocolate is on sale now pic.twitter.com/6zKkuLRU2V

No one should ever have to watch Shrek alone. THAT is a travesty.

Listen boys, the only kiss I'm having on New Year's Eve is metaphorical with my lord and savior Jesus Christ, can I get an amen

12) Could Lili actually be the queen of fan interaction?

@reggmantle can u do it for me?

How do I explain to my dad why people call his daughter "daddy"...?

14) Listen, she lowkey ships Betty and Veronica too. *chanting* One of us! One of us!

These bring me joy at the end of the day. You all are incredibly creative. I applaud you. pic.twitter.com/Lbn3nMMxaK

Calm down, more Beronica too. That's a given.

15) Queen of responding to haters.