Surprise, Logan And Jake Paul Have Been Tweeting Problematic Stuff For Years 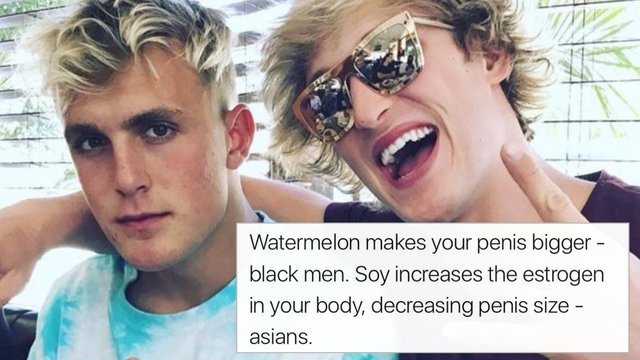 If you weren't aware of Logan Paul before last week, his disastrously offensive vlog footage from a recent trip to Japan likely changed that. He caught some serious heat for footage of him reacting to the body of a recently deceased suicide victim. Even the seemingly "normal" parts of the trip were a culturally insensitive trainwreck.

If you thought this behaviour was new for the Paul brothers, Buzzfeed has pointed out that Logan and Jake Paul have actually been tweeting low key terrible stuff for years.

Some of the darker highlights from Jake and Logan's Twitter archives include...

(At a restaurant, annoying child behind us) "I wonder how much that boy weighs. My noose only supports 80 pounds."

Girls tweets always get more favorites and retweets. Only cause they have tits and ass.#Cheaters

My roommate is Muslim and it's almost 9/11. However, we are celebrating peace here, not war. pic.twitter.com/CckO99dAjk

Hey world. If you didn’t know, @LoganPaul has always been disrespectful and racist towards Asians.

This is nothing new. Sadly. pic.twitter.com/Gq1OIbUuoX

The internet is seemingly divided over the value of bringing up old tweets when celebrity controversy strikes.

Some of their younger fans have also noted that the boys were in their teens when they tweeted many of these things.

Logan and Jake make tidy salaries and pay other people's salaries from their work online. For them not to delete, address, or show regret over their past words means that their recent actions are not just one-off occurrences. Their actions represent a pattern of behaviour that has been fueled by a total lack of accountability their entire careers.

Next time you see a tweet that asks, "why do we let people like this get famous," just remember that posts where Logan and Paul use words like "retard", "queers", and "tits and ass" have remained available online while the pair landed endorsement deals, film cameos, and TV roles.

Logan's Japan vlog may have finally exposed the type of person he is, but the evidence has been available online for years.