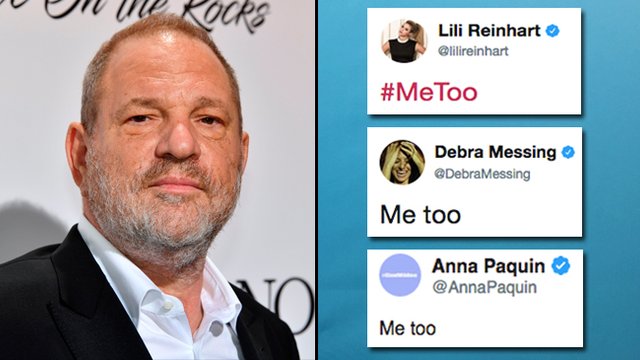 Thousands of social media users shared their experiences in a bid to raise awareness and help others in the wake of the Harvey Weinstein allegations.

Some readers may find details of this story upsetting.

In the wake of the explosive Harvey Weinstein sexual assault and harassment allegations that broke last week, women have been sharing their stories online using the hashtag 'Me Too'.

The actress Alyssa Milano launched the idea on Sunday (October 15th) in a bid to raise awareness about the issue and show the world just how prevelant and commonplace harassment has become:

If you’ve been sexually harassed or assaulted write ‘me too’ as a reply to this tweet. pic.twitter.com/k2oeCiUf9n

Soon, the hashtag became a trending topic on Twitter with high profile actresses, musicians as well as women and men from all walks of life sharing their experiences, including Riverdale's Lili Reinhart and Will and Grace star Debra Messing. Over 30,000 people have used the hashtag so far.

Here are just a few of the many messages posted so far under the 'Me Too' hashtag:

okay ugh hi i was sexually assaulted by a longtime friend in august. i had been broken up with the day before. i was in pain. he knew #metoo

On behalf of my beloved Nana, who sadly is no longer with us, may I add #MeToo.

Me too. I don’t know if means anything coming from a gay man but it’s happened. Multiple times.

When it comes to the #MeToo movement, I see men wondering what they can “do to help.” This is my list.
1. Be quiet.
2. Listen.
3. Learn.
4. Lead/teach young men by example.
5. Stand up to friends and family who act in an abusive manner.
6. Stand behind women, not in front.

This isn't about gaining sympathy, we want people to realize the magnitude of sexual assault. It shouldn't be as common as it it. #metoo

To everyone who's posted a #MeToo tweet I want you to know I think you're incredibly courageous, it's not your fault and I believe you.

Sometimes the most important thing to do is listen. This is one of those times. #MeToo

there is help and hope in even just having words to describe what you are feeling. I hope this reaches whoever needs it. #ptsd #metoo

If #MeToo is “making you uncomfortable”, you’re the one it’s meant to reach. Silencing sexual assault victims doesn’t make it any less real.