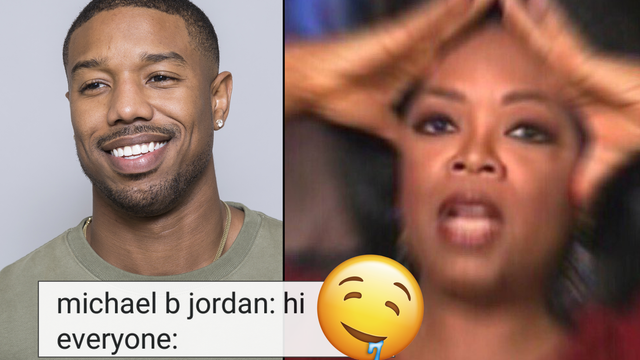 Michael B Jordan has been hot this whole time, but his recent appearance as Killmonger in Black Panther has refreshed some people's memories. Here are some posts you'll only understand if you're ready to risk it all for Michael B Jordan.

michael b jordan: hi
everyone: pic.twitter.com/MNIcVsFUMA

2) the guy she tells you not to worry about is Michael B Jordan.

When you watchin Black Panther wit yo boo and Michael B. Jordan come on the screen pic.twitter.com/lzTbb1vRIe

when michael b jordan took off his shirt in black panther pic.twitter.com/lptRUdQEWc

michael b jordan: *breathes*
me: pic.twitter.com/rV83izE6JT

Me the first time I saw Michael B. Jordan on that screen with those golds in his mouth: pic.twitter.com/w7kDo3iqpr

I don’t make the rules but Michael B. Jordan literally belongs in a museum. pic.twitter.com/JOm3Mixobt

9) I've been replaying this scene in my head so much that it feels like it happened to me.

clear eyes, full hearts, I would do anything to have michael b jordan wearing glasses explain to me in a museum examples of white people getting history wrong pic.twitter.com/mRDszNLTuQ

Would you like us to slide into your DMs every afternoon with all the latest news and quizzes in pop culture? Subscribe to the PopBuzz Scoop.

When Michael B Jordan was chocking that lady in #BlackPanther & said “When I tell you to do something you do that shit” I whispered “Yes daddy”.

me outside Michael B. Jordan's house after watching BLACK PANTHER once pic.twitter.com/tPXHoJzFXY

16) My sexual orientation is Lupita Nyong'o making Michael B. Jordan do push-ups on demand.