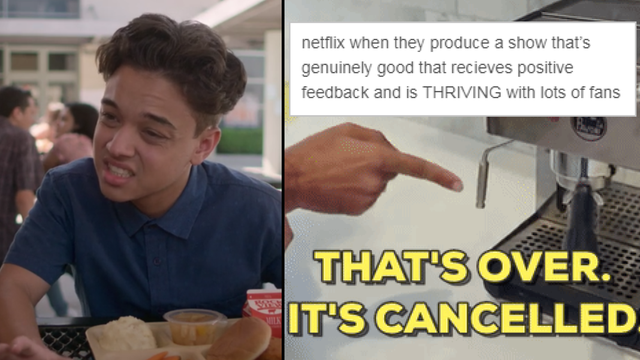 Netflix has gifted us with a hilarious and emotional new show called On My Block. The rule is that, once you watch the show, you have to tell 10 friends to watch it so that Netflix doesn't cancel it before that cliffhanger gets resolved.

If you have seen On My Block and can't stop thinking about it, here are some posts you'll feel deep down inside your soul.

monse and cesar have me by the NECK watch on my block whores! pic.twitter.com/Q77tyZFdsr

my friend: h-
me: WATCH 'ON MY BLOCK', NOW STREAMING ON NETFLIX

everyone watch on my block, the show is excellent plus the main characters are latino and black. pic.twitter.com/1Par96omWK

3) laughing, but also genuinely screaming into the void about this.

all i can think about is how jamal is gonna take the news of what happened to his friends poor baby's heart wont be able to take it UGHHH pic.twitter.com/yw0YP16MdT

5) Raise your hand if you feel this in your soul.

On My Block spoiler without any context pic.twitter.com/VZw3vAf7C4

6) Lattrel, we're gonna have to fight.

on my block stans @ latrell pic.twitter.com/5rDUtcF16J

8) my friend: "sis, are you being paid to promote this show? why do you talk about it so much?"

I really got everyone watching on my block pic.twitter.com/zd7dPL22io

me at Netflix if they don’t renew On My Block for a second season #OnMyBlock https://t.co/MJatiOaNrv

(on my block) me watching the crew dance but then seeing latrelle pic.twitter.com/RZi6AqiXih

(on my block) me watching the crew dance but then seeing latrelle pic.twitter.com/RZi6AqiXih

On My Block, Abuelita and Jamal at any given moment: pic.twitter.com/4hGEOr2i03

ruby is the one recording, jamal is the little girl, all the secrets he has to keep is the juice. pic.twitter.com/JgxpUqE5GF