FINALLY! After a week of waiting for the app to officially hit the UK, Pokémon was finally unleashed into the UK App store at approximately 9:40am, rendering the country's working day useless. If you've just downloaded the app and are just getting started, here's a bunch of handy hacks to help you on your way to becoming the very best.

1) Get Pikachu as your Starter Pokémon

Because who WOULDN'T want Pikachu as their first companion?!

2) Hatch eggs without walking an inch.

(Don't travel faster than 12mph though... it can detect that you're cheating. Naughty Pokemon trainer!)

3) Figuring out those paw-prints on your radar.

If you see a Pokemon with one paw print it means it's just under 20m away from your current position. If you hover around the area you're in, you'll find it in no time! If the Pokemon has three paw prints, it means you better head out on a brisk walk 'cause it ain't in your immediate surroundings!

4) Save battery life by switching off AR when you're trying to catch Pokemon!

Even though it's pretty exciting to see a Pidgey on the shoulder of the tourist in front you, the use of the camera is rinsing your battery SO much! Switch off the AR in the top right corner and play in the animated world!

5) Change the names of your Pokémon so you know which ones to choose in battle.

Guys look who I found on #PokemonGO pic.twitter.com/QPfnzAEZPm

Obviously, you wanna sign post the stronger Pokémon for when you head into battle. If you've got more than one of the same Pokémon, give it a distinctive name that highlights its special skill!

6) The weather affects the type of Pokemon you're able to catch.

7) You start to receive more advanced Pokéballs when you level up.

You start getting Great Balls at Level 12 and Ultra Balls at Level 20. So make sure you catch everything you can and visit every Pokéstop you see to get those XPs up!

You're not gonna need all those potions and revival stones for a while so keep the space for your Pokéballs!

9) There's no limit to how many times you visit a Pokéstop.

Once you click on a blue Pokéstop, you can collect your goodies and leave - thats when it turns purple. After around 5 minutes, the stop turns blue again meaning you can keep visiting it without a limit. If there's one next door to your school or your work - BINGO! Free Pokéballs all day.

10) How to upgrade your Pokémon faster.

Go out and catch everything you can. When you get enough duplicates, you can trade them back to Professor Willow in exchange for candy - which means you'll be able to increase your Pokémon's HP way faster than normal!

How do you throw a curveball? If you hold and swirl your Pokeball around in a circle, it creates a curve on the ball. Throw the ball to the side of the Pokemon, and it you catch it, you get a tasty bucket of extra XP!

There's nothing worse than catching a Pokemon and then seeing it wriggle out again two seconds later. If you hold down the Pokeball before you throw it, and release it when the circle is the smallest. You'll catch it one go. Green circles mean it's a fairly easy catch, orange is intermediate and red means verrry difficult to catch.

Now go forth and become the very best!

(We'll update this post when we find more hacks!) 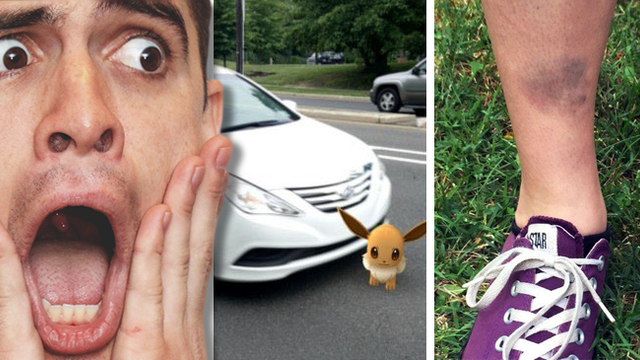 Pokemon Go Is Already Ruining People’s Lives - But Like, It’s Totally Worth It Anyway