Yes, You CAN Still Be Offended By The H&M Ad, Even If The Boy's Mum Isn't 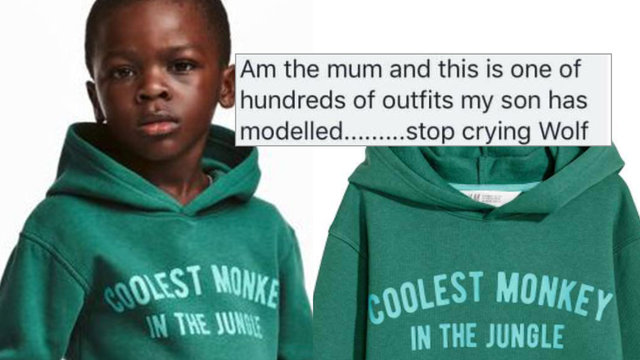 The boy's mother released a statement but the ad is still hugely offensive to A LOT of people.

If you spent any time on the internet this week, you most likely saw an H&M ad that many deemed racist or, at the very least, extremely problematic.

. @hm, have you lost your damned minds?!?!?! pic.twitter.com/EYuCXLZtv3

It featured a young black model of Kenyan descent dressed in a hoodie with “coolest monkey in the jungle” emblazoned on the front. Referring to black people as “monkeys” and apes has traditionally been an insult employed by racists to dehumanise and degrade.

While many were offended by H&M’s poor judgment, others wondered whether the ad was actually offensive at all. “Do you think his parents would allow their child to be part of a racist ad,” asked one Twitter user.

We got an answer to that question when the model’s mother reacted to the backlash, saying, “[I]am the mum and this is one of hundreds of outfits my son has modelled. Stop crying wolf all the time, unnecessary issue here. Get over it.”

With the mother of the young model labelling this an “unnecessary issue,” we suddenly find ourselves in a strange position.

Can you be offended on someone else’s behalf?
The mother of the boy has since spoken out and it doesn’t seem like she is on board with the backlash. However, taking in the entire picture means that people on the internet are examining this controversy beyond just her son.

Very few people have argued that H&M intentionally put this young man in a hoodie with problematic messaging on it. The overarching conclusion is that the word “monkey” has such specific historical and cultural context, somebody should have noticed the uncomfortable connotations before the ad went public.

This backlash is more about how this brand of negligence and insensitivity can be an unfortunate side-effect of institutions that are bereft of black leadership and creative oversight from people of colour.

Teen Vogue columnist Lincoln Anthony Blades tweeted about the mother’s response, writing, “understand that racism is NOT strictly a personal experience, but rather a group attack. The ad was offensive to BLACKNESS, not just 1 boy.”

The truth is, sometimes we can and should be offended on people’s behalf. It’s understandable that this mother might not want to draw attention to her son, as it may traumatise him or prove damaging to his career. Her feeling that the ad was not offensive may be her own personal truth, but many black people, especially in America, are conditioned to be hyperaware of this type of coded language and imagery.

To this day, black football (soccer) players are routinely taunted with monkey chants and bananas thrown at them during televised games. Imagery, words, and context matter a great deal.

These backlashes can seem like much ado about nothing, however, they are often the correct response to an insidious type of negligence that is harmful, whether everyone agrees it is or not.

It does feel odd that strangers on the internet are offended by something that the child’s own mother feels is okay, but it is unrealistic to ask routinely marginalised people to table their outrage.