The Internet Is Pissed Over Snapchat's New "Blackace Filter" 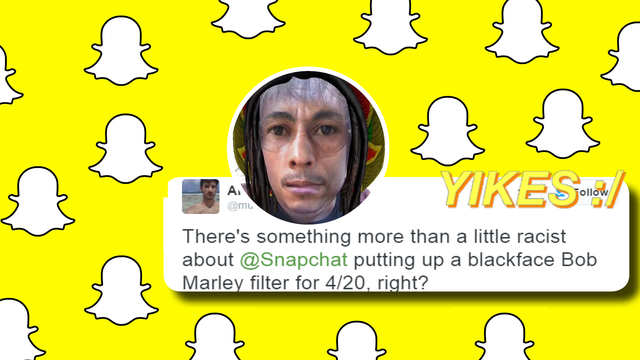 I think we can all agree that Snapchat seems to be in the midst of some sort of filter revolution. Now, for funsies, you could become a dog, trade faces with basically anything, and even explode your head. But a thing has happened. And people aren't sure what to think of it because this might be the first time a Snapchat filter has been (probably) politically incorrect.

So today is 420 (blaze it) and, like any digital internet based entity, Snapchat are chasing that young user base with a 420 (blaze it) themed filter. Fair play to Snapchat. Gotta help create that #content.

But people started to notice something...off about their new 420 (blaze it) themed filter.

Understandably, people are kind of freaked out and angry.

This Bob Marley filter on snapchat is getting someone fired today. Blackface because it's 420 and he smoked? Really?

@piripiface The key to success is NOT blackface snapchat filters. I'm out.

great snapchat just what we need, a blackface filter?

And this special dude who quite literally predicted Snapchat crossing the line two days ago.

It's only a matter of time before Snapchat releases a filter that's a little too close to blackface.

Now, for anyone unclear on why this is (probably) blackface, let me also unpack this for you.

Blackface has been a culturally insensitive practice, largely, since the 1800s. It was used as a way to demean and present a caricature of black people. It has since become a socially unacceptable practice. In case it wasn't 100% clear on what black face is, it's when a person who is not black alters their appearance to look as if they have darker skin.

Not to mention the fact this may or may not be perpetuating negative stereotypes of black people.

We know it's all for funsies buuuuuuut, it most certainly rubs a lot of people the wrong way.

What do you guys think? Is this Snapchat feature offensive?