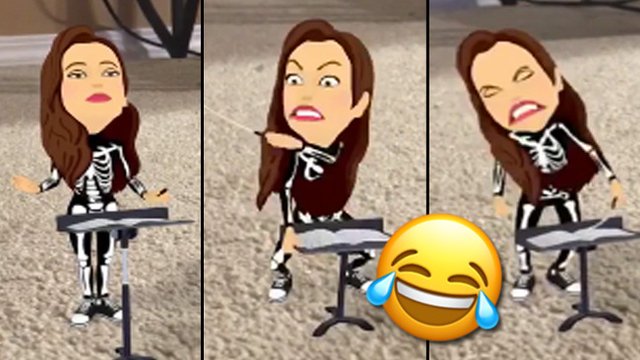 From Twenty One Pilots and Panic! At The Disco to Kanye West and 'Phantom Of The Opera', music fans everywhere are leading the band thanks to Snapchat's latest update.

Snapchat have come through once again with the perfect new filter for all you music lovers out there - a mini conductor to guide you through all your fave songs.

Using face recognition, Snapchat users can now watch as a bitmoji version of themselves leads a fake band or orchestra through whatever song you like.

Here's an excellent take on a Twenty One Pilots classic:

Or for you musical theatre fans out there, here's some Phantom Of The Opera:

I love the new conductor Snapchat filter.
The Phantom Of The Opera pic.twitter.com/wm0ioEM9MS

How about some Panic!?

This took me 10 tries pic.twitter.com/kxXU9fzyhU

Any Meek Mill stans in the building?

My edition of the Orchestra conductor filter on snapchat. #FreeMeekMill pic.twitter.com/vfVvdngX4z

It even works with metal:

Snapchat has a conductor filter! This is going to happen a LOT now @rjhanny @SamNelles1 pic.twitter.com/PWiINBNiHo

Kanye and Rihanna go OFF!

First of all I’m mad snapchat just gonna portray me so accurately if I was a conductor lol.....secondly I got paid for this snap....let that sink in lol

Oh go on then - one more TØP number!

my snap is kind of going viral! last night, a few tøp accounts posted it on IG and altogether it’s gotten ~75K views! who would’ve though people out there actually think the stupid stuff i do daily is funny?! it’s too bad i didn’t get too much credit but oh well, the comments i’ve seen are awesome! from twentyonepilots

Have you tried out the Conductor filter yet? Share your best clips over in the Facebook comments.

QUIZ: Do you belong with Zac Efron or Troy Bolton?

QUIZ: Everyone is a combination of two SpongeBob characters, which are you?