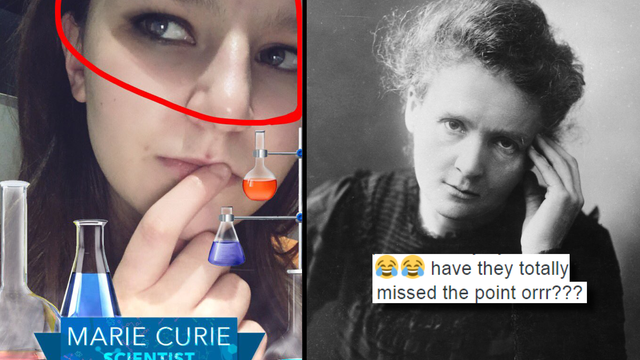 International Women's Day was huge this year. No doubt your feed was full to the brim with amazing messages to and from brilliant women.

Of course, International Women's Day did have some curiosities. For example, can anyone explain Snapchat's "special" Women's Day filter?

Shoutout to the smokey eye on that Marie Curie Snapchat filter for giving me the confidence to demand equal pay. pic.twitter.com/Bo1YFePvH0

I appreciate the effort @Snapchat but why add the makeup to the Marie Curie filter? #InternationalWomensDay pic.twitter.com/CQ1MZ9S3ZJ

why does the marie curie sc filter have a full face of makeup??? lol didn't know that world renown physicists had false eyelashes

Why have snapchat given the Marie curie #iwd filter a pure smokey eye look with longer lashes?! have they totally missed the point orrr??? pic.twitter.com/BfmQzkuKcx

Madame Curie's life wasn't about having a smooth complexion or a smokey eye. Madame Curie was a two-time Nobel Prize-winning scientist and the first woman to actually win that honour.

She was known best for her pioneering work in the field of radioactivity and, notably, did not wear falsies to the lab.

THANK GOD the Marie Curie #intlwomensday Snap filter has eyeshadow&mascara! I almost thought u didnt need makeup to be a scientific genius

While we're huge makeup fans, this filter gets filed into the ever-growing collection of Snapchat "special" filter fails.

Someone even pointed out that the scientific structures shown in the filter have nothing to do with Madame Curie's specialty.

@angelaescodawg ALSO Y DOES THE FILTER GIVE FULL EYE MAKEUP &PERFECT SKIN IS BEING A BADASS SCIENTIST NOT ENOUGH? GOTTA LOOK HOT TOO I GUESS

Okay, well you tried it, Snapchat.