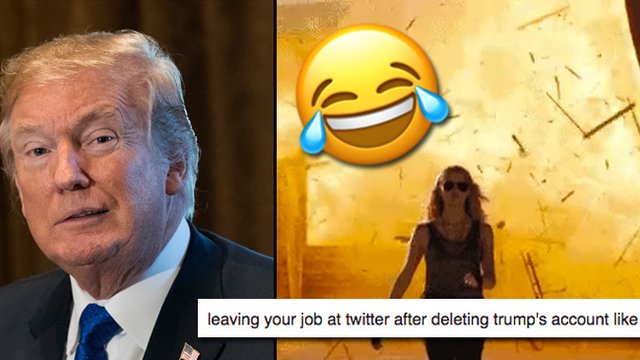 The memes were on fire after a Twitter employee celebrated their final day at the office in spectacular style.

Twitter officials blamed the event (this counts as an event right?) on "human error" before later revealing that it was the work of some absolute legend who was on their final day of work in the company's technical department:

Through our investigation we have learned that this was done by a Twitter customer support employee who did this on the employee’s last day. We are conducting a full internal review. https://t.co/mlarOgiaRF

Trump sadly made his grand return to social media some 11 minutes later but we should never forget just how glorious those sweet few moments of Donald-less Twitter were.

Here are just a handful of the greatest party moments those minutes had to offer:

Actual video of that Twitter employee before walking out pic.twitter.com/88TVCS9SXU

Just gonna say it, the employee at Twitter who shut off Trump's account for 11 mins could become a candidate for the Nobel Peace Prize.

I’m saving this picture of Trump's Twitter account as a reminder that anything can happen with anyone no matter how big you are!! pic.twitter.com/09fpkODtM8

Good times everybody. See you at the impeachment.