Talk Tumblr To Me.

Free breakfast! TV Show screenings! Putting on art shows with your favourite bands! Access to a meme library! With a meme librarian!

Slow down - this is too much to handle!

As far as dream careers go, working at Tumblr has to be up there with chocolate taster and professional games tester as one of the most sought after jobs available. Nate Auerbach may have the most desirable job of all, working in the site's music department and stopping by the UK to put on the The 1975's pop up shop in London last weekend. We caught up with Nate to find out what it was like to work with Matty and the boys, his favourite GIFs and, most importantly, how you can end up working there. 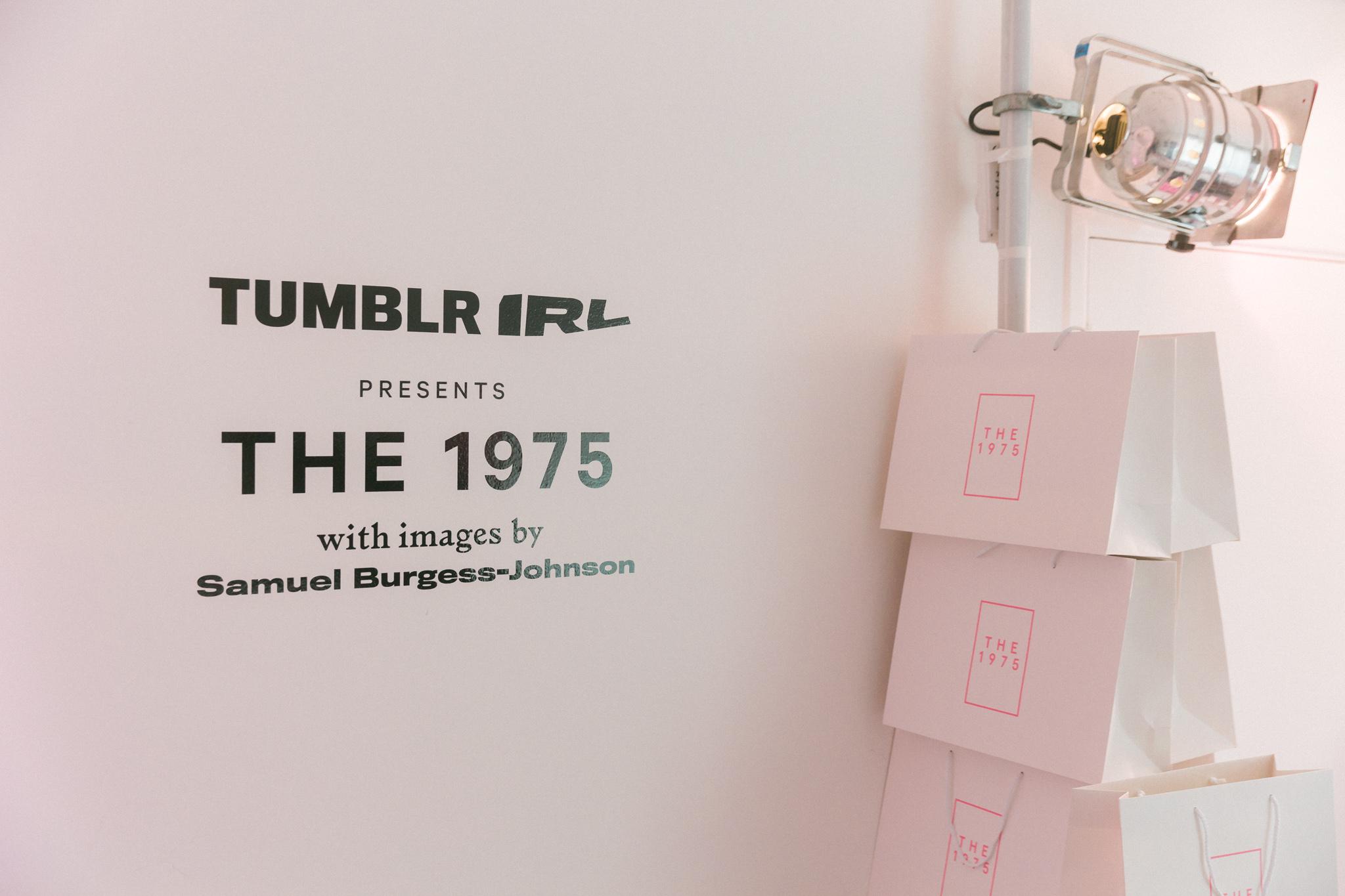 Pop-Buzz: So first of all, The 1975 art show looked amazing, how did that come about? Did you approach them or did they approach you?

Nate Auerbach: It's kind of both, we've been in constant conversation for years and it's just a matter of timing and of when their album was coming out. This pop up shop was a concept the band really wanted to do and was working on with their photographer and visual designer Samuel Burgess-Johnson. They also set it up in New York City and it was a perfect fit for the Tumblr IRL series.

PB: This was the first Tumblr IRL event outside of the US right?

NA: This was the first one outside of America. We're doing them when and where it makes sense. The 1975 is such an important band to Tumblr and to the community that it was a no-brainer for us. And it just made so much sense for our community and it was perfect that was the first one that we got to do in London. 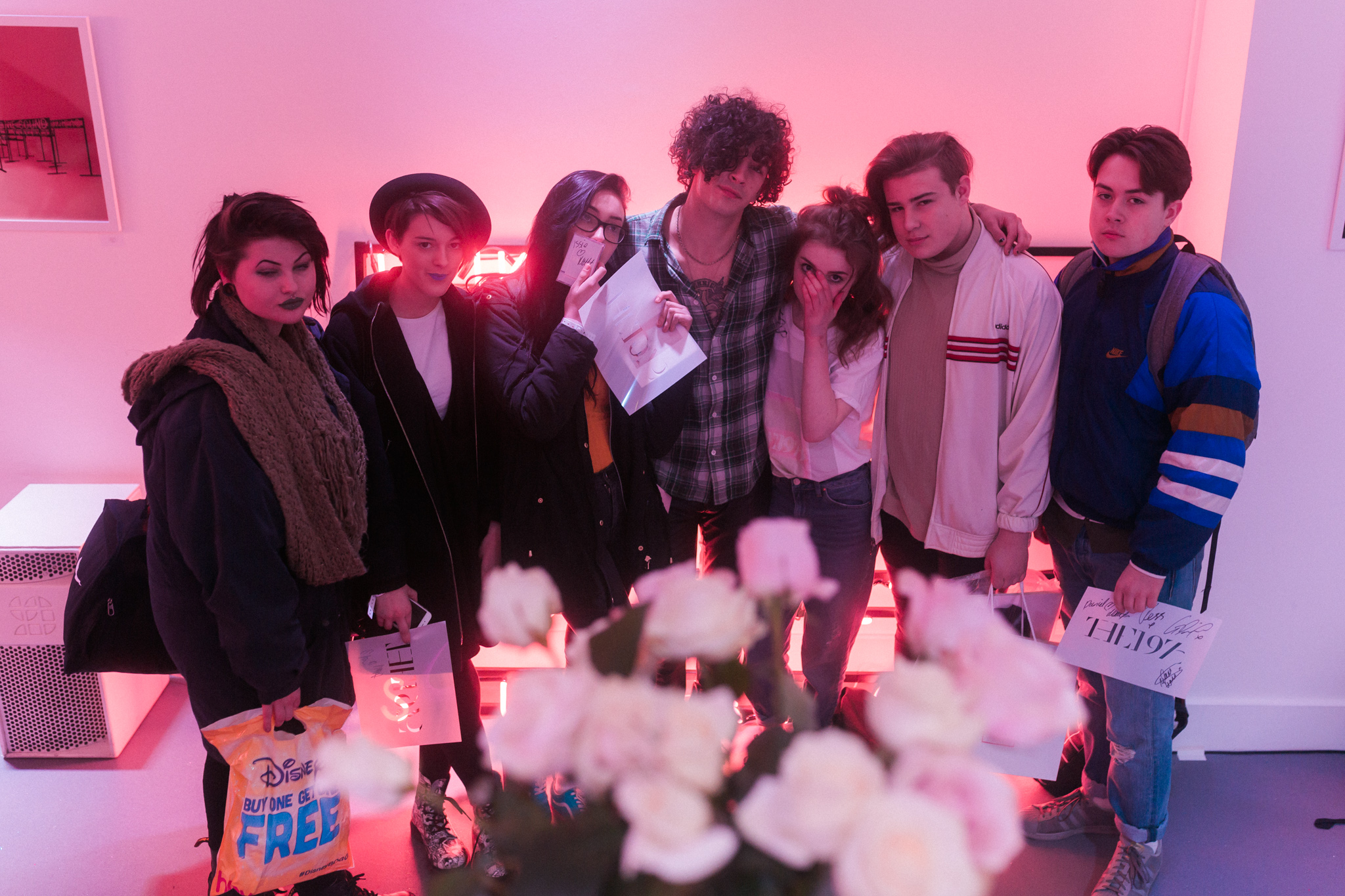 PB: How was working with them? Was it a full collaboration or were you more facilitating their idea?

NA: It's more that we helped them facilitate. Everything that we do with artists is based on their vision. It's kind of the same way that Tumblr works - it's a blank canvas for bands like The 1975 to realise their creativity in different outlets in addition to music. The pop up shop was an IRL version of that. Literally.

PB: How do you choose which acts you want to work with?

NA: So, it has to be a band that's relevant to the Tumblr audience, whether that's someone who has a great fandom on Tumblr and is just starting a presence or whether it's someone who has been cultivating a presence on Tumblr for years or, in The 1975's case, both. That's first. And they have to have a solid vision for their Tumblr, really engaging their fanbase. Their album has to be good - it's relevant to our audience and progressive and new and innovative. And the collaboration has to be there because that's a big part of it - the musicians working with a visual artist. 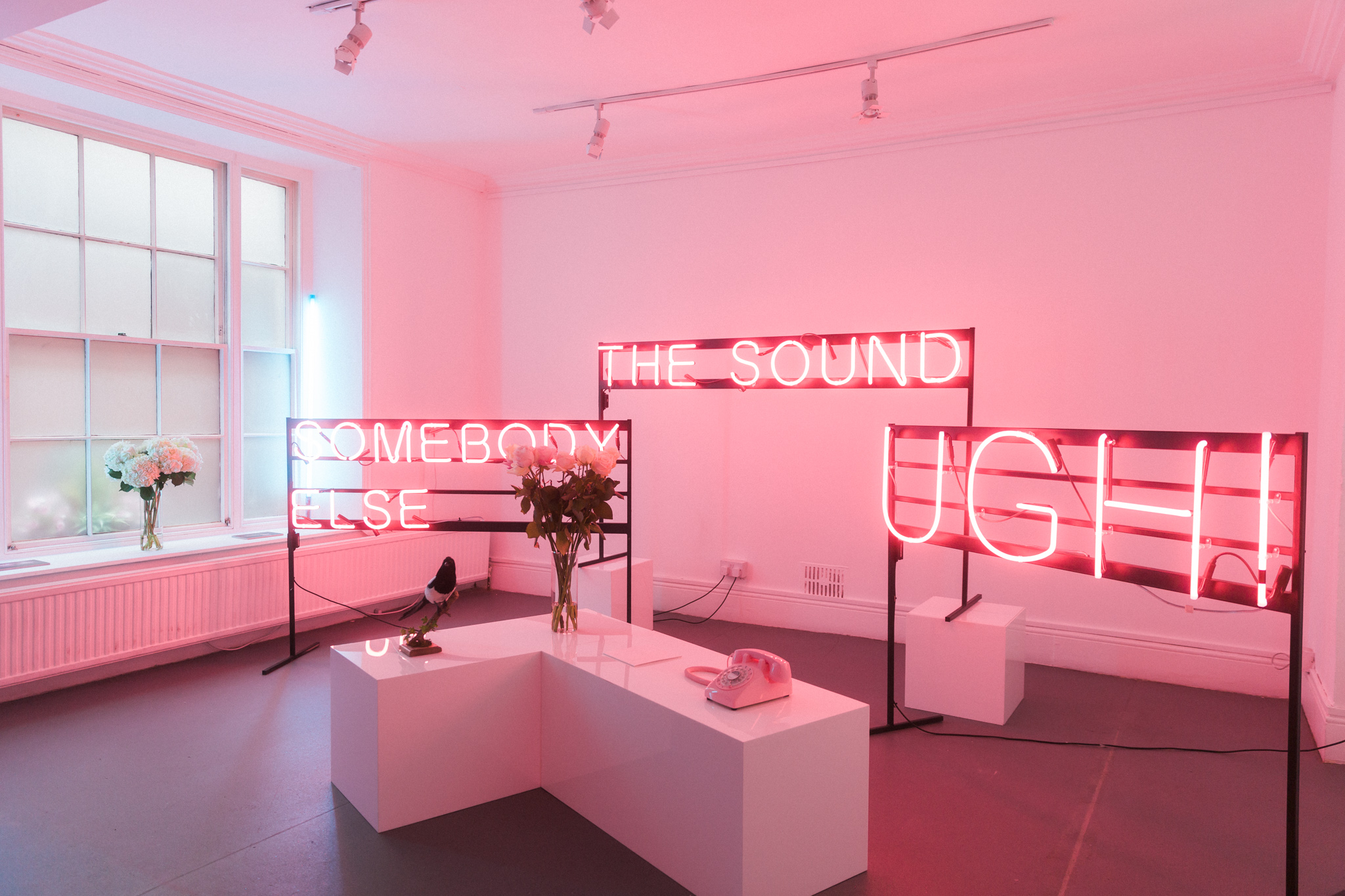 PB: It's interesting you say "progressive" - do you find the acts the Tumblr audience go for tend to be the more theatrical and boundary pushing artists?

NA: That's one type that the audience goes for. Really it's....it's kind of hard to explain. It's bands you can't put in one compartment that brings them to the Tumblr audience because they're people who are susceptible to so much.

PB: So who are the biggest artists for the Tumblr audience?

NA: The 1975 is one of them. Taylor Swift and Beyonce are staples. Twenty One Pilots is a band who has built their audience through Tumblr since they were just only playing shows in Ohio. Odd Future - Tyler The Creator specifically and Frank Ocean specifically. Grimes - she's been a big one. A lot of these artists come up in my Google alerts or I just see tons of music fans that I follow on Tumblr posting about them or posting unique things. So sometimes it's what the artists create and sometimes it's what the fans create about the artist. It's a constant communication - the artist will put out a music video and the fans will take hold of that and breathe a whole new and different and interesting kind of life to it.

PB: What is it about Tumblr do you think that attracts that kind of fandom over other avenues of social media?

NA: For one thing you can do just about anything on Tumblr, you can publish anything and it kind of was the platform for the resurgence of the animated GIF. And that has become this whole new medium for memes and for expression.

A long time ago, people at Tumblr would say "If a picture is worth a thousand words then a GIF is worth a million".

NA: Yeah. And it's also the social tools - the reblog and the like button. The fact that we don't publish people's follower counts makes it more about the type of content and the quality of your content than about how many followers you have. So the gain is different. On other social platforms it's about how many followers you have, who's in the top 8, stuff like that - that's a Myspace reference by the way. It's also a place where people connect based on shared interest rather than on a social graph of friends. It also allows for safety based on anonymity. So people discovering things culturally can feel comfortable exploring their interests. The social tools are all built on positivity - we don't have commenting in our platform so if you're going to respond to someone or if you're going to talk about something you're going to reblog their post and essentially put what they said on your soapbox and add to that with your own words. So, unless you have a hater blog, you're not going to really be posting things you don't like.

Everything on Tumblr is based around love.

PB: That's a beautiful sentiment, they should put that on the front page everyday! So I know lots of our readers will think you have the dream job - what's your average day to day?

NA: There is no average day to day - it's crazy. I mean right now I'm on my way to the airport in London to fly back to New York where I work and I'll probably be doing some work on the plane. I haven't slept much in the last week because I've been working on this 1975 thing and our SXSW activation and booking bands for that. We also did a Tumblr IRL on Friday night with Santigold in New York City at a 99 cent stores and it was the most unparalleled Tumblr IRL - so unique and I never thought we would do something that crazy. That's another case of an artist's vision coming to reality because of her belief and her passion. NA: So, day to day is looking at the whole music landscape and seeing everything we can do and working as hard as we can to bring the best content and bring the best bands to our platform and make sure the music fans on Tumblr get to discover bands they might love in the future or connect in a meaningful way with bands they already love. You can do a lot of things on Tumblr - it's very overwhelming for a lot of people. You'd never catch my parents using Tumblr. They can figure out Facebook and my Mom is using Instagram but they could not figure out Tumblr. It's a very overwhelming platform so it's about working with artists on how they can make it work for them.

NA: Oh and, in terms of a dream job, we get lunch three days a week, Monday/Wednesday/Friday, and we get breakfast on Tuesday and Thursday. And tonight I'm missing a screening we're doing of the first episode of the new season of House Of Cards in our event space.

PB: See I thought I had a sweet job but this is just putting me to shame.

PB: On a much stupider note, what's the Tumblr office cookie of choice? What's in the office biscuit tin?

NA: I love chocolate chip - that's my favourite food on the planet, chocolate chip cookies. I think some people go a little more daring but it's safe to say that's a good one. People love a good Snicker Doodle.

PB: What do you make of the rise of the Pepe meme?

NA: Oh, I think it's entertaining, I love it. I love seeing stuff like that pop up. It's not really my expertise but we do have a meme librarian at Tumblr who could go on with you about Pepe and she probably knows more than you could imagine a person would know about Pepe. That's her vibe.

PB: Do you have any fave memes or reaction GIFs from over the years?

NA: I love a good 90s reaction GIF, whether it's Ninja Turtles or Saved By The Bell. Or Seinfeld.

PB: Have you ever been really surprised by a band or artist that has got big on Tumblr out of nowhere?

NA: My Chemical Romance continues to be the most surprising band that pops up in the fandometrics because they haven't brought anything out in a while. Fall Out Boy and Panic! At The Disco are still out there so I get it but the My Chemical Romance one is astounding. Some people would say "how is Halsey in the top five all the time?" and that's not as surprising to me because she is our audience. If you go to a Halsey show and see her interact with her fans - she does these amazing meet and greet where she hangs out with her fans - they all look like the Tumblr audience. But My Chem, yeah.

PB: It's kind of cool that their following still lives online.

NA: Yeah and even when Gerard Way put out his solo album he was still discussed less than My Chemical Romance. Oh and by the way, he was using Tumblr.

PB: Of course he was! You are about to go back to New York - what do think the mood will be like in the office now that all the Leo Oscar memes have to die?

NA: Everyone was expecting it so I think it will be business as usual. I think everyone's bracing themselves for whenever the next Beyoncé video will come out or whatever will be next. It's the least surprising Oscar nod that I think has happened in a while.

PB: That's fair. Lastly, for all the kids reading this who are obsessed with your site, how do they get a job at Tumblr?

NA: Well we do have jobs postings at tumblr.com/jobs. Most of them are engineering jobs so work on your engineering chops kids! Learn to code, become really good at it, especially in mobile. If you're in school or college, look at our internship job placements. But most importantly, just be passionate about whatever it is you are doing.

So there you have it kids - if you want those chocolate chip cookies and access to Gerard then you better get coding!

Or, at the very least, make sure your blog is always on point! 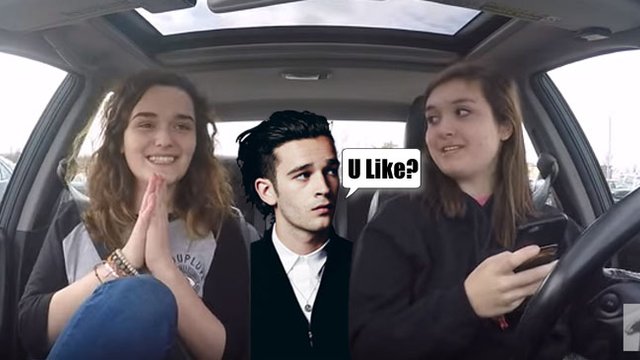