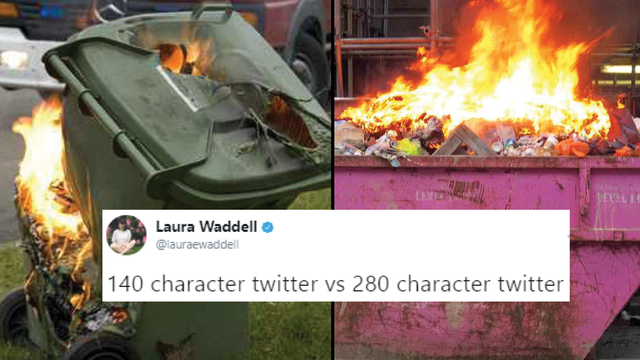 "Idea: instead of 280 characters, keep it at 140 characters and bring back Vine."

Twitter has announced that the days of the pithy 140 character tweet are behind us. Founder @Jack tweeted about the company's decision to test 280 characters on the site, calling it a solution to a "real problem".

This is a small change, but a big move for us. 140 was an arbitrary choice based on the 160 character SMS limit. Proud of how thoughtful the team has been in solving a real problem people have when trying to tweet. And at the same time maintaining our brevity, speed, and essence! https://t.co/TuHj51MsTu

Twitter users will now be able to convey a paragraph of thought and not everyone is psyched about the change.

Others were worried about what is bound to happen when Twitter trolls realise they can send death threats that are twice as long.

And now, a thread about why short tweets are preferable...oh wait...

why shorter tweets are actually better (1/35)

twitter: SO WHAT IF we took that arbitrary number and say… double it??

We're all still waiting for that edit button with bated breath.

Hey @Twitter instead of 280 characters how about giving us an edit button. You can even limit the edit to within 5 minutes of tweeting.

new twitter character limit, but instead of 280 characters it’s 69 characters

Idea: instead of 280 characters, keep it at 140 characters and bring back Vine.

Most importantly, there were heroes out there who used their 280 for good.

It looks like Twitter will have to deal with this torrent of ridicule as long the platform's real problem of abusive behaviour remains.
Jack responded to the "snark" by saying it was par for the course and that he hoped users would give it a chance.

We expected (and !) all the snark & critique for #280characters. Comes with the job. What matters now is we clearly show why this change is important, and prove to you all it’s better. Give us some time to learn and confirm (or challenge!) our ideas. https://t.co/qJrzzIluMw