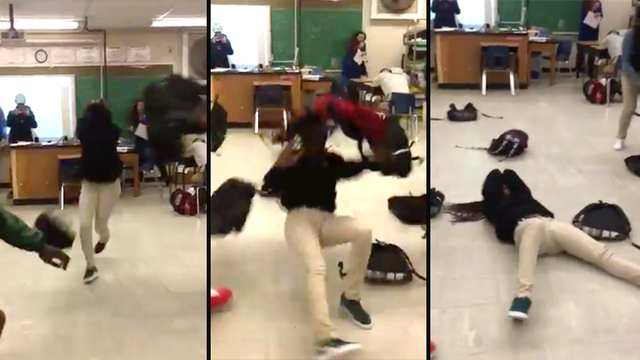 Whatever you do at school today, do not do this.

In case you missed it the first time around, the aim of the challenge is to run along a corridor and try to stay on your feet while a group of about 20 other people hurl massive heavy backpacks at you. It's kind of like Total Wipeout but at school. And with bags full of school folders and text books instead of spongey giant boxing gloves.

The challenge isn't new. It started sometime around November of last year under the name #bookbagchallenge but it's back and it's been rebranded because honestly, who calls 'em bookbags?

And the results are freakin' wild.

For the love of God, don't try this at home.

Couldn't think of a better way to get a black eye #BackpackChallenge pic.twitter.com/fKp3poFuyE

But on a serious note... this challenge is extremely dangerous. Especially when you're hurling massive bags full of books at people's heads. Broken bones, concussion... It doesn't even bear thinking about what would happen if a bag strap got caught round someone's neck tbh...

So don't do it. Obviously.