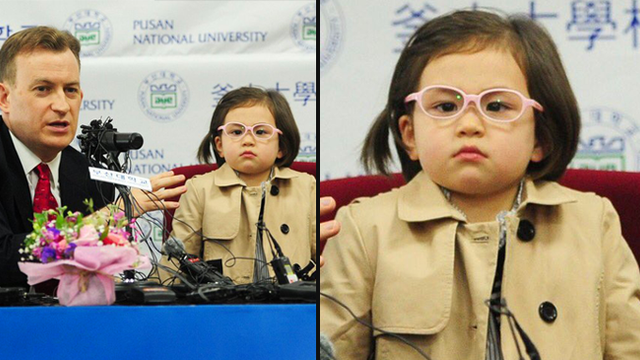 Man your battle stations and update your meme calendars, you paupers. For there is a new meme queen in town.

Cast your minds back to last Friday, when Professor Robert Kelly sat down for - what he thought was going to be - a quiet and uneventful interview with BBC News via Skype only to realise a few minutes later that his two tiny children had burst through the door to interrupt the broadcast.

Let's relive that moment shall we?

Their mother rushed in to drag them out but she was too late. They had already been catapulted to instant internet fame. The clip itself has been views millions and millions of times but it wasn't until Wednesday (March 15) when the entire family appeared at a press conference did Marion, the iconic yellow sweater wearing legend, became a meme.

If she isn't President of Earth by the time I'm 80, I'll be bitterly disappointed. pic.twitter.com/f5qEfaaPT7

A future President, the new star of your favourite cop drama, revered sleuth and star of Hollywood's latest buddy comedy, a fashion icon... Marion Kelly is EVERYTHING.

when you’re a tough, no-nonsense detective who’s had it with those pen-pushers at city hall pic.twitter.com/ihjr6AfgnV

All I want in life is for BBC Interview girl and Library of Congress girl to team up and solve mysteries pic.twitter.com/yQ9zOFeRv7

me, when my outfit bangs and you people are gon' learn today pic.twitter.com/4ZRuZXpwAh

Robert Kelly's daughter in his press conference (live on BBC World TV now) chomping her lollipop like a cigar is the embodiment of thuglife. pic.twitter.com/05OhEKLHRm

When will your faves? (SPOILER: Never...)