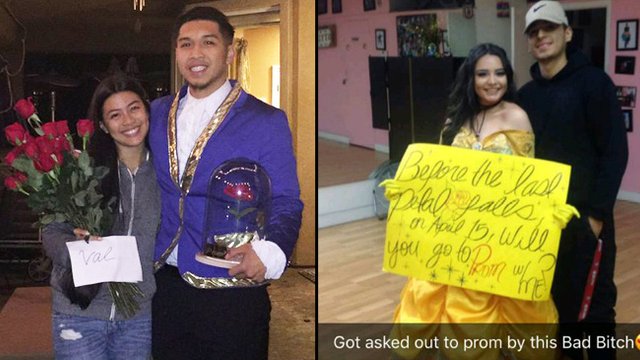 It's an idea as old as time, and its cute as cute can be (or something, I dunno, lyric parodies are hard...)

It's promposal season once again and teenagers across America are finding all manner of new and elaborate ways of asking their potential date to do them the honour of letting them hire a limo and escort them to the school hall.

And one movie in particular is inspiring many budding Romeos in their quest for viral romance fame - Disney's live action beastiality-themed fairytale Beauty & The Beast.

And the trend appears to be catching on, with several other Disney-inspired promposals popping up online in celebration of the biggest movie in the world right now.

promposal before watching beauty and the beast pic.twitter.com/rTBpmrIMtJ

Beauty and the beast was good but my promposal was better@peyton_turner13 pic.twitter.com/n1CGJHt1Oy

This was my first promposal ever and she's taking me to go see Beauty and the Beast#shsu #gayprom #shsuprideweek pic.twitter.com/Uq6AqOfilr

Had to do a beauty and the beast promposal for my favorite dancer pic.twitter.com/MQFeZ1zmBe

I am just so blessed to have this man in my life! I love him so much! Happy Valentine's Day! ... Beauty and the Beast Promposalpic.twitter.com/LXpH45qvgr

So happy. I got a Beauty and the Beast promposal and picnic pic.twitter.com/y0U7kuKME4

We reckon this is only the beginning of the trend. Get ready for dancing candlesticks and singing teapots before prom season is over.

Had your own awesome promposal this year? Let us know.