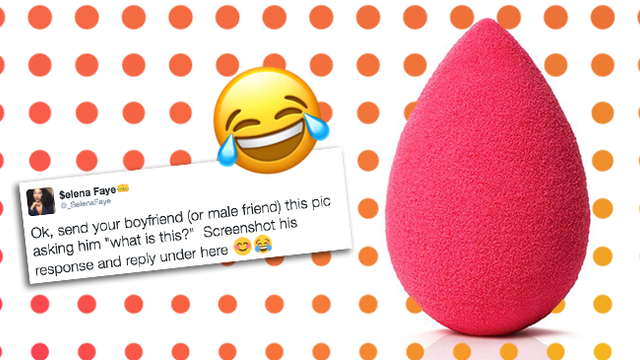 "Is it boob stuffing?"

This little pink sponge has gone viral in the most hilarious of ways and it's about to make your day. It all started when Twitter user _SelenaFaye asked this simple question:

Ok, send your boyfriend (or male friend) this pic asking him "what is this?" Screenshot his response and reply under here pic.twitter.com/ZaxLal2alK

Of course, everyone here knows exactly what that pink egg-shaped thing is, right? In case you don't know, it's a beauty blender. A sponge that people use to achieve maximum blending on their liquid foundation and contour. Some say it's better than using a brush, some say it's not... we'll let you decide.

Anyway, after a few minutes, people began responding to the original tweet with screenshots of their boyfriends' replies and the results are absolutely incredible.

This guy thought it was literally a "pink, soft egg."

"An oval has compressed into a pointy top."

"The alien from Chicken Little"

There were a few BAEs out there who did know what the beauty blender was... like this guy.

Honestly, what a trip.