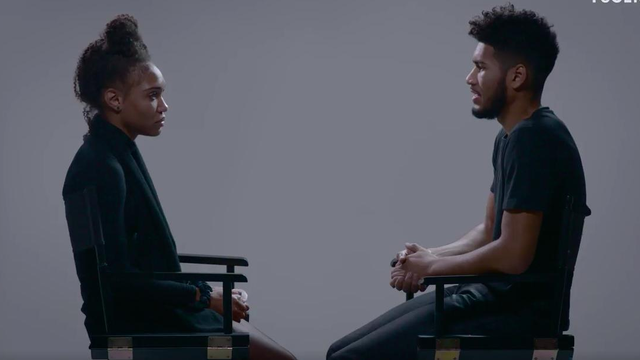 Here's why #HurtBae is the most relatable heartbreak meme ever.

Are you ready to simultaneously have your heart broken and be filled with a furious need for vengeance? Well you might want to consider giving this video a watch.

Created by The Scene, this interview between Kourntey Jorge and her ex, apparently called Leonard, is as straight-forwardly described as possible: "He cheated on her. Now she wants to know why."

A sit-down between exes for the #content isn't really heard of, and now we know why; this guy's unapologetic smugness about the way he treated our leading lady is infuriating.

He cheated on her. Now she wants to know why. pic.twitter.com/5hdlpKisjZ

Asking her questions like "Why didn't you leave?" is a bit rich coming from the person doing the cheating. But the lowest point for us personally has to be when she asks him how many times he cheated. His responds? "I wasn't counting". That's the moment where she gets up and walks off for a bit - and blimey, we don't blame her.

In the wake of this guy's sh*ttiness, the internet has risen up; not only has the video been retweeted nearly 140 thousand times, but the hashtag #HurtBae has cropped up in response to this poor girl's humiliation.

Some are heartbroken for Kourtney.

#hurtbae
"I forgave you because you were my best friend." pic.twitter.com/2Mmoorbsje

If you are not serious don't get started. Don't awaken a woman's heart if you have no intentions to love her right.

Some want to DESTROY Leonard.

"How many times did you cheat on me?"
Him: Idk I lost count

And everyone highkey wants to date her instead.

This is Kourtney Jorge, the beautiful girl that was on that scene video. She. Is. gorgeous. pic.twitter.com/Mwotgp2RcQ

But it's not all badness and sadness.

Since the video was filmed, Kourtney has moved on and is apparently thriving in a new relationship.

For all of those wondering, I am in a happy relationship with someone who treats me so very right  Thanks so much for the love! -xoxo https://t.co/SFTHv6rGat

And she is still very cute.

I'm happy, and you're not the reason. pic.twitter.com/iDKzsfTbDO