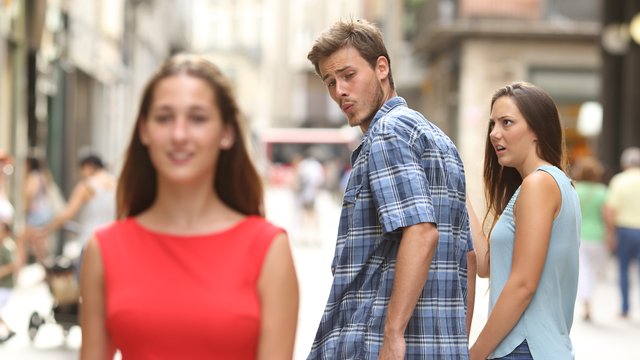 The photographer and the models of the iconic stock photo have finally spoken out about their new found fame.

After weeks of hilarious edits, the people behind the hilarious 'distracted boyfriend' meme have spoken out about shooting the iconic photo and their reaction to its reincarnation as a meme.

Antonio Guillem, a stock photographer from Barcelona, was first revealed as the man behind the shot, entitled 'Disloyal man walking with his girlfriend and looking amazed at another seductive girl'. He sent a statement out to the press earlier this week after being flooded with enquiries:

"My models and I work really hard and we make a living out of our work, so the meme situation is just an anecdote that can be curious, but we haven’t worried about it until now that’s starting to get out of control. I never thought that one of my images will be that popular. I didn’t even know what a meme is until recently, when the models started to tell me about the memes that people were doing with our work."

The photo was shot as part of a set in mid-2015 in the Gerona area of Catalonia in Spain. Fans of the meme had already discovered several of the other pics online:

THE CONCLUSION WEVE ALL BEEN WAITING FOR pic.twitter.com/48f6s5y9KG

But who are the people in the shot? Well Antonio didn't want to reveal the third woman who distracts the boyfriend as she no longer works with him but the couple are Mario and Laura, both of whom recently spoke with The Hollywood Reporter about their sudden rise to fame:

"Laura: First of all, I’m the “girlfriend,” ahah. For me, it was a curious and funny photo shoot, especially when we had to make the photos like the meme, more humorous. When people saw us simulate those scenes in the street, they stopped to look and laugh, and in my case, that I had to have a more serious face, I had a hard time to keeping it, ahaha.

Mario: I remember that it was kinda embarrassing because there where people watching and laughing, and I had to make this silly face. But in the end, like we always do, I just forgot they were there and did my job. I remember it like a learning experience, and I had fun with my team."

But while the Spanish models are clearly enjoying their photo's new found fame, they are choosing to remain anonymous at the moment. Fingers crossed we'll be seeing more similar shots in the future from this pair soon then.