People Have Turned Drake's 'God's Plan' Video Into A Meme 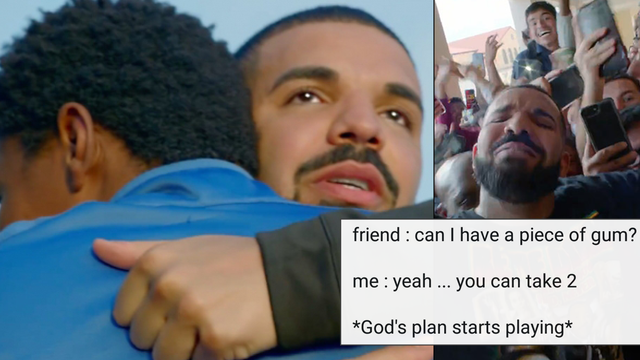 The God's Plan meme sums up doing the bare minimum and we're SCREAMING.

Earlier this year Drake released the music video for his song "God's Plan" and now it has officially received the meme treatment. In the video, Drake can be seen performing extremely generous acts like handing people stacks of money and paying their school tuition.

Because the internet plays too damn much, people are making up their own "God's Plan" scenarios and we cannot stop laughing.

me: yo lets go to mcdonalds

Me: *thinking about skipping class today*
Professor: "hello everyone, something has come up and will have to cancel class today"

Teacher: Pull out the homework

Me in my head: “we had homework??”
*still reaching in my empty bag like it’s something in there*

Teacher: I’m gonna give you guys until Friday to complete this assignment

Brother: "it's been a long day, and I'm hungry"

Me: "I already ate.. but I saved you some food"

8) *opens bank statement* Narrator: It was not God's Plan

Also me: Get yourself a takeaway on me

9) When they hit you with a block

Sends my crush a risky message

*they reply with blocking me*

friend : can I have a piece of gum?

Me- *lets my supervisor take credit for my work cuz hes on thin ice with our boss this week*
*Gods plan starts playing* pic.twitter.com/EmAvZdnUAL